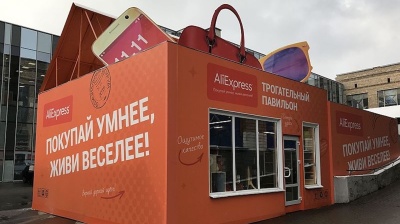 Tmall already ranked sixth of all e-retailers in 2019 with RUB36bn in sales, soaring by 162%. The company also stepped up investment in logistics and deliveries as the coronavirus (COVID-19) lockdown boosted competition in e-commerce.

Sergeev also told Reuters that AER plans to bring the ratio of local merchants on its platform to 50%, from 20% at present. Notably, he did not rule out an AER IPO in three to four years.

VTB Capital estimated that AER's GMV in 2019 stood at RUB250bn ($3.5bn), which would mean that the company aims to triple its volume.

VTBC pointed out that AER is the biggest e-commerce player in Russia, although the share of the domestic business on its platform is still relatively small, generating only about RUB36bn GMV versus RUB200bn for cross-border business.

The analysts estimate that AER accounted for 12-12.5% of the Russian e-commerce market (both cross-border and domestic) in 2019, with the market share target not set at 16-18%.

"Overall, we believe that AER is well positioned to take advantage of the rapidly expanding e-commerce market in Russia. We note that, excluding the cross border segment, the e-commerce market stood at just 6% of the total retail turnover in 2020," VTBC commented.

Notably, Mail.ru Group, which holds a 15% economic interest in AER, is seen as benefiting from the growth of this joint venture, "while the JV's potential IPO could help unlock its value for equity investors and current shareholders," VTBC added.

Earlier in 2020, before the COVID-19 outbreak, the "big four" Russian e-commerce operators, AliExpress Russia, Wildberries, Ozon and Beru, were expected to eventually be leading a market consolidation drive.

"The more developed an e-commerce market is, the more likely it is to have a dominant leading player," Sberbank CIB argued in January 2020, pointing to Amazon, whose share of 45% of the US market is 6.4 times larger than the second biggest player. In China, leader Alibaba's 62% share is 2.5 times bigger than its closest rival, and in the UK, Amazon's 27% share is 2.6 times bigger.

The consolidation scenario is seen as likely for Russia, as the country's vast geography might hinder achieving the scale needed for sustainable and profitable growth without burning cash for consistent customer acquisition for all large players in the market.

Sberbank CIB saw the key challenges for AliExpress (the most popular online store in Russia in terms of reach and user engagement) as maintaining cross-border GMV growth despite regulatory headwinds and developing the Tmall platform into an independent, strong and profitable player.