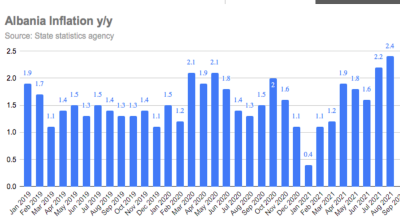 Albania’s consumer price index (CPI) showed year-on-year growth of 2.4% in August, while the month-on-month increase of the index was 0.4%, statistics office Instat said on September 4.

Albania’s annual inflation has accelerated for the last couple of months, in line with the general trend across emerging Europe as the post-coronacrisis recovery gets underway.

Following robust growth in Q2, the central bank increasingly expects inflation to return to target during 2022. Official GDP growth figures for the second quarter aren’t out yet, but the Bank of Albania says the recovery gained momentum during the quarter after 5.5% y/y GDP growth in Q1.

The biggest price increases in August were for food and non-alcoholic beverages, which shot up by 4.6%, contributing 1.61 percentage points (pp) to the overall increase in the CPI.

There were also substantial increases in prices for transport (4.3%), communication (2.9%), hotels, coffee houses and restaurants (1.5%) and recreation and culture (1.4%), while prices in other categories grew by smaller amounts.

Looking more closely at food prices, the steepest increase was for vegetables (including potatoes), where prices climbed by 18.3%, and there was a 7.2% y/y rise in oil and fats prices, while fruits cost 3.2% more than a year earlier.