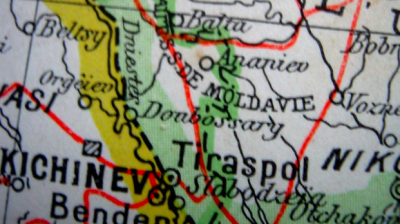 Detail from a 1925 map of the Soviet Socialist Republic of Moldova, which at the time broadly corresponded to present day Transnistria. The Soviet border was moved westwards after the Second World War, when the whole of Moldova was annexed by the Soviet Union.
By Nicolae Reutoi of Alaco February 22, 2020

Not long ago, while visiting my parents in Chisinau, I searched my mother’s bookshelves for a Jack London novel that I wanted to show my wife, a Russian native speaker. The book was in Cyrillic, a relic of pre-independence Moldova, then part of the Soviet Union. I eventually found it and handed it to my wife, who looked puzzled. No wonder. The text was written in Moldovans’ native language.

I had succumbed to a moment of linguistic blindness. It was pardonable lapse. Growing up in Chisinau in the late 1980s, we wrote our mother tongue — which some today call Moldovan and others Romanian — in Cyrillic. The name distinction is a sensitive issue. Not so much for millennials like me, but for older generations — who experienced the Soviet Union, witnessed its break-up and the birth of an independent Moldova — what you call the language says a lot about your political leanings and identity.

Dinner parties have been known to get quite feisty on occasions when the language dispute rears its head. Politicians appearing on national television have been known to get hot under the collar over the issue. And in the early noughties an ill-conceived attempt at a Romanian-Moldovan dictionary was greeted with a mixture of bewilderment and hilarity. It was probably not dissimilar to the reaction many in former Yugoslavia must have had to their post-independence governments’ rebrand of Serbo-Croatian as Serbian, Croatian and Bosnian.

Moldova’s linguistic controversy looks set to make headlines this year. Some suspect President Igor Dodon, who falls into the camp that insist on calling the national language Moldovan, will look to make political capital from the dispute as he attempts to secure a second term in presidential elections in November.

The passions provoked by the issue must puzzle observers.  For a traveler visiting Chisinau, there would be little to suggest Moldovans conduct themselves in anything other than the Romanian language. There is a strong rural dialect, which mixes Romanian and Russian words, again a hangover from Soviet times, but that is the only evidence of any linguistic divergence. The point of contention revolves purely around the name of the language, little more — and that is wrapped up in the recent history of the region. Formerly part of Tsarist Russia, Moldova reunified with Romania after the First World War. Following World War Two, Moldovans found themselves annexed by the Soviet Union.

The Soviet Union fostered strong identities amongst its constituent republics, with Moldovans encouraged to view themselves as a nation, distinct from Romanians, and to regard their language as Moldovan. It was written in Cyrillic instead of the Latin script used by Romanians, hence the Russified Jack London novel I borrowed from my mother’s book shelf. The Soviet experience did leave its mark on Moldovans, not least because of the influx and influence of ethnic Russians and the state education system. I learnt Russian at school in the 90s, even after independence, and the language remains widely spoken across Moldova.

In more recent years, the language issue has been politicised as splits in Moldova over its future course and identity have deepened. The country’s political landscape has been divided between politicians advocating closer ties with Russia and those calling for further European integration. The former usually define the national language as Moldovan, the latter Romanian.

Politicians’ adoption of the language issue is seen by some as rather cynical, just like the rival political camps’ frequent scaremongering about the fate that awaits Moldova should it come under Russian or Western European sway. Many Moldovans see the geopolitical rivalry embraced by their politicians as a means of distracting attention away from widespread corruption in business and government, which is the country’s most pressing problem.

The politicians’ stance on language is often reduced to point-scoring. In TV interviews, pro-European and pro-Russian politicians might object respectively to an interviewer’s reference to the Moldovan or Romanian language. When in government both factions do not miss an opportunity to take a linguistic position, even to the extent of removing navigation bar references to either Moldovan or Romanian — depending on which of them is in power — from official websites.

The tensions over language are not confined to domestic Moldovan politics. The Romanian and Russian governments are also inclined to get involved. For example, last month, the Romanian Academy in Bucharest, a government-supported cultural organisation, criticised the promotion of the “idea” of the Moldovan language as distinct from Romanian. It followed President Dodon, a pro-Russia politician, speaking in favour of Moldovan at the Council of Europe — which added weight to predictions that he will take up the issue in the presidential campaign.

Yet for many Moldovans, whose attention is mostly focused on making ends meet, these spats whether at home or with Romania are seen for what they are: distractions from the real issues — perennial economic problems. And, as long as these remain unresolved, it seems the political class will likely be reluctant to end their exploitation of the language divide.