After betting everything on a Trump victory, Hungarian PM congratulates US president-elect Biden on Sunday 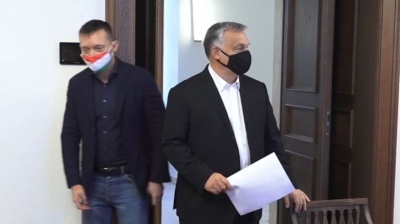 Communication chief at the Prime Minister’s Office Antal Rogan (left) and PM Viktor Orban (right) arrive at the meeting of the coronavirus task force on November 8.
By Tamas Szilagyi in Budapest November 8, 2020

Hungarian Prime Minister Viktor Orban congratulated US president-elect Joe Biden on November 8, after most EU leaders had done so the day before. He was the last prime minister within the V4 group.  Hungary’s illiberal leader was in an uncomfortable position as he bet heavily on a victory for President Donald Trump and openly acknowledged that he had no plan B in case the incumbent lost. Pro-government media outlets remained in denial on Sunday and focused on voting irregularities. Opposition parties have been emboldened by the result ahead of the crucial 2022 parliamentary elections.

"Allow me to congratulate you on a successful presidential campaign. I wish you good health and continued success in performing your extremely responsible duties," Orban was quoted by state news agency MTI.

Orban was the only EU leader in 2016 to come out in full support of Trump, which finally earned him a visit to the White House in May 2019. The prime minister endorsed the incumbent in September and in an interview he expressed his optimism that Trump would be re-elected, saying he had "no plan B", should the Democratic candidate come out on top.

In a regular radio interview with state radio on Friday Orban said that "unlike his Democratic predecessors, Donald Trump had not berated Hungary". He called Trump "a friend of Hungary", adding that US-Hungary relations had been on top form during his presidency and that is why he had “always been for Trump”. "The outcome will be what it will be; it’s the right of the American people to decide who governs America," he said, adding that it was up to Hungarians" to decide who governs Hungary and how".

Biden managed to anger politicians in both Hungary and Poland when he likened the two countries to the authoritarian regime in Belarus.

This drew an angry response from Hungarian Foreign Minister Peter Szijjarto, who struck back in a Facebook post where he advised Biden to address corruption allegations concerning his son Hunter Biden’s activities in Ukraine before resuming dealings with Hungary.

During eight years of Democratic rule, US-Hungarian relations soured over rule of law issue, which took a u-turn during the Trump administration, which turned a blind eye to the deterioration of democratic values.

In recent years, Hungary has sealed huge defence contracts with the US and trade grew 20% in the last four years. Orban has established close ties with US ambassador David Cornstein, who left office just before the election.

Cornstein often downplayed criticisms concerning the deteriorating rule of law in Hungary, which led to disputes with the State Department. In the summer of 2019, he threw a huge July 4th party where Paul Anka performed a re-written version of My Way dedicated to Hungary's strongman.

"Thank you, President Trump, for the past four years! Thanks to him, Hungarian-American relations have been the best they had ever been. We hope that the Biden's administration will not ideologically undermine these results. We'll see..." Fidesz communications chief Istvan Hollik wrote.

While Orban remained quiet during the weekend, parliamentary opposition parties commented on the results on social media with a clear sigh of relief.

Democratic Coalition (DK) leader, former PM Ferenc Gyurcsany said Biden’s win is “a real hope that the world will get a little better”.

Hungary’s second-largest opposition party Momentum said: "We had to wait a lot for it, but the change came! It won't be any different in Hungary either!"

Hungarian opposition is gathering strength from the results, hoping that the defeat of Donald Trump will weaken populists, including the ruling Fidesz party. Opposition parties are working hard to strike a deal to field a single candidate in all 106 districts in the 2022 parliamentary elections, which is expected to be just as tight and heated contest as this year's US presidential race.

Hungarian media leaning toward the government was late in reporting the news of Biden’s victory on Saturday night. Independent sources learned that news editors of state television and those working for Orban loyal outlets received instructions in a letter "not to announce a winner yet".

Journalists and editors should focus on legal challenges filed by Trump and on voting irregularities, the letter reads.

These instructions probably came from Antal Rogan, who oversees government communications, although there is no official proof of that, independent sites wrote.

Government-friendly media outlets have often resorted to orchestrated attacks on opposition parties, NGOs, billionaire George Soros and those critical of the government using the same key phrases and terminology, which suggests some sort of coordination.

Hungary's media landscape has changed dramatically over the last eight years. Until the end of 2019, it was concentrated in the hands of few oligarchs allied with Orban, who transferred their companies to the Central European Press and Media Foundation (KESMA) in 2019. The antitrust investigation of the transfer of some 500 outlets was blocked by the government.

KESMA outlets operate with vast financial resources from state ads, while independent media struggle to live off the market. The country’s media freedom is also under scrutiny by the EU.