AFC Capital: Uzbekistan leads regionalization that is the new globalization 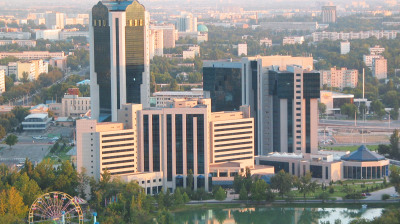 Stalin forced Uzbekistan to industrialise at high cost but now those sacrifices are paying dividends / wiki
By Scott Osheroff in Singapore May 8, 2020

Is regionalization the new globalization? Today’s globalization has its roots in the post-World War II world where manufacturers in western countries benefitted from the labour arbitrage captured in outsourcing manufacturing to countries with significantly lower labour costs—mainly Asia—a deflationary exercise.

Globalization led to enhanced efficiency in global supply chains, seeing many industries transition to just-in-time inventory management, which helped to keep working capital and inventory requirements low. The system worked beautifully until a shock event such as COVID-19 came along to freeze the system.

With supply chains impaired, an increasingly nationalist focus is appearing across the world as we are seeing little to no coordination among EU countries regarding closing of their borders, many countries shuttering their borders and airports to all foreign travel and trade (the Crisis Staff head, Roman Prymula of the Czech Republic told Czech Television recently that border controls may have to be kept in place for an extended period of time and possibly up to two years), while Vietnam, the world’s third largest rice exporter, temporarily banned rice exports to ensure domestic demand is met and Kazakhstan banned exports of “socially significant food products”.

It is worth pondering if this is indeed a watershed moment for globalization and its future is to be reshaped as the concept of regionalization becomes increasingly prevalent, where clusters of countries leverage their strengths to supply regional partners (i.e. manufacturing in Mexico for the USA; an accelerating trend in recent years).

For example, taking a look at Vietnam, it hosts a large manufacturing and agro-industrial complex making it the “factory” of ASEAN and certainly to the Indo-Chinese region with its economies of scale and integrated supply chains.

As Vietnam should be to ASEAN, Uzbekistan should be to the Commonwealth of Independent States (CIS) countries (Armenia, Azerbaijan, Belarus, Kazakhstan, Kyrgyzstan, Moldova, Russia, and Tajikistan) as well as Afghanistan and Turkmenistan, helping it to develop a gravity for foreign direct investments.

In preparation for an expected German invasion prior to World War II, Joseph Stalin ordered strategic industrial assets to be moved from Eastern Europe to Uzbekistan. This turned Uzbekistan into the most industrialized Soviet Republic.

With its vast industrial base, after Uzbekistan gained independence in 1991, President Karimov decided not to follow the Washington Consensus of free-markets, but instead focused on protectionism through high import duties, turning the country into a fortress of sorts through import substitution – Uzbekistan became one of the first CIS countries to have its own auto manufacturer and national airline while it pursued self-sufficiency in wheat, oil and meat.

These sacrifices under the previous regime have given Uzbekistan the gift of being to the region as Vietnam is increasingly being to the rest of the world (often regarded as a second, but mini China).

Uzbekistan, with its large labour force (hosting the largest population in Central Asia at 34mn) and manufacturing base, has the potential to create a gravity for manufacturing firms and investors in the value-added commodities sphere.

This is already occurring with the most recent example being the development of a textile cluster in Bekabad City in South-Central Uzbekistan where a foreign company, SPUNMELT, plans to build a factory for the production of 7,000 tons of raw material used in the production of surgical masks. Uzbekistan already has domestic mask production, but the raw material (which is polypropylene based) is currently being sourced from China, Turkey and Russia. Uzbekistan being a major producer of polypropylene courtesy of its sizable natural gas and chemical industry, aims to become self-sufficient in this raw material and become a net exporter to the rest of Central Asia.

Uzbekistan’s FX ace in the hole

As the gears of global trade cease up over the short-term and countries go into lockdown due to COVID-19, countries with short dollar exposure (those that have borrowed dollars at the sovereign or corporate level) are likely to begin experiencing increasing and varying degrees of strain on their debt service.

With global trade and tourism not bringing dollars into these countries, FX reserves will have to be spent to service debts, which will in turn weaken their currencies versus the dollar. This will be compounded by many countries now initiating stimulus, which will consume yet more of the FX reserves. The longer the global economy is in lockdown the more severe the situation will become. Major exporting nations such as Mexico now face this issue as orders for manufactured goods have collapsed with western countries battling the virus.

While Uzbekistan’s external debt/GDP (sovereign and corporate debt) stands at 46% of GDP and it likely seeks long-term modest depreciation in the Uzbek Som to support exports, the country would benefit from making sure this happens in an orderly fashion, especially as the country maintains a current account deficit of $3.2bn in 2019 (a decrease from $3.5bn in 2018) due to the reindustrialization of the country, which is leading to strong imports of machinery for textiles, steel, cement, and food processing sectors.

Uzbekistan should be able to manage this situation well as in the current time of a global economic crisis it’s proverbial ace in the hole is gold—a commodity in extraordinarily high demand due to worries about the global economy and whose price, which is expected to rise substantially over the coming years as countries continue to debase their currencies, with over $10 trillion in global stimulus enacted year to date and certainly with more to come.

Already having a free-floating currency, Uzbekistan has the opportunity to temporarily bolster the exchange rate during the current instability through exercising its gold production. Uzbekistan is ranked ninth in global gold production and hosts two of the largest gold producing companies in the world: Navoi Metallurgical & Mining Combinat and Almalyk Mining & Metallurgical Combinat. By monetizing a portion of production, being that FX reserves topped $30bn in February ($17.25bn of, which is gold, equal to 33% of GDP) it has a guaranteed source of foreign exchange to support the economy and currency, something very few countries in today’s world have.

If the government of Uzbekistan implements proper policies, the country could become a safe haven of sorts for investors and manufacturers over the medium term.

Decoupling from West to leave Russia as China’s junior partner
1 day ago
MACRO ADVISORY: Ruble at 5-year high, how strong can it get?
5 days ago
COMMENT: Sanctions are working, but the West risks isolating Russian reformers instead of galvanising them
9 days ago
NEMETHY: Where are US markets? Where are they heading?
9 days ago
COMMENT: Constanta concerns
16 days ago