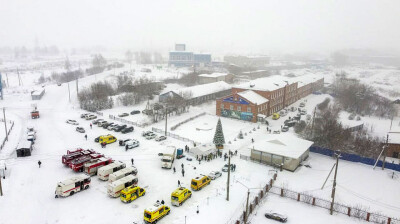 Some 63 died at the Listvyazhnaya coal mine in the Kemerovo region in Siberia / wiki
By bne IntelliNews November 26, 2021

Over 63 miners died during a methane gas explosion in a Siberian mine on November 25.

"According to preliminary information, no one is left alive in the mine," state news agency TASS quoted a source in the local emergency services as saying.

The Listvyazhnaya coal mine, near the town of Belovo 3,600km east of Moscow, filled with smoke early Thursday with 285 people inside, Governor Sergei Tsivilev wrote on his Telegram channel, as cited by the Moscow Times.

“We heard a loud bang. Gas everywhere. Put on rescue devices. Those who could got out, but those that couldn't and didn't get out,” an eyewitness told RT.

The emergency services told Interfax that 239 miners were evacuated following the explosion, which happened at 04:30 a.m. Moscow time.  This is the worst mine accident in Russia since 2010.

Search-and-rescue efforts for the trapped miners were suspended due to high methane concentrations and the risk of another explosion.

Six of those killed were rescuers that reportedly suffocated in a rescue attempt that went tragically wrong. The team had gone into the mine to find trapped miners but soon stopped responding, according to Interfax quoting a local official, who said they had suffocated.

Eleven rescuers were hospitalized during the rescue operation at the Lisvyazhnaya mine, where the methane explosion occurred, Kemerovo Region Governor Sergey Tsivilyov told journalists.

"Besides, 11 rescuers were hospitalized, one with a cranial injury, and 10 with poisoning; the medics assess their conditions as moderately severe, there is no life threat," he said.

According to regional authorities, 38 miners have been hospitalized with injuries and another 13 are being treated for their injuries on an outpatient basis. RIA Novosti reported that three of those hospitalized are in critical condition.

Senior managers at the mine in Russia's Kemerovo region had been detained for suspected safety violations, after the latest deadly accident to hit the country's vast mining industry, reports the Moscow Times.

No exceedance of the maximum allowable concentration (MAC) of methane was registered at the Listvyazhnaya mine before the emergency, a source in technical supervision agency told TASS.

"There was no methane MAC exceedance, sensors did not register it. Probably, a sudden release occurred," the source said, adding that the epicenter of the disaster has not been determined yet.

The rescue efforts continue although the chances of any survivors is very low.

Three rescue units have been dispatched and will seal the mine which will be filled with methane until its concentration reaches safe levels. These works are expected to take three days, after which the search for bodies will continue, Kemerovo Governor Tsivilyov told journalists early on November 26.

"Three rescue units have arrived, a plan has been outlined; the units are being briefed right now and are preparing to enter the mine. The plan of action is this: these three units will seal the galleries, which will be filled with methane naturally - about 257,000 cubic meters - so that the gas concentration could achieve over 20%, when the risk of explosion is reduced. According to our predictions, it will take three days. After that, we will make a decision to carry out further [rescues] operations at the mine," the governor said as cited by TASS.

Three days of mourning starting on November 26 has been declared in the region.