Will Lukashenko join the war? 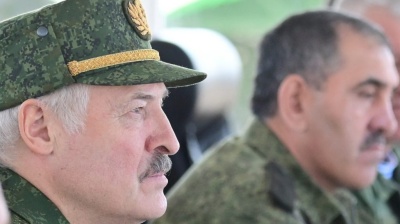 For the past couple of weeks, Ukrainian intelligence sources have repeatedly been cited as saying that Belarus may join Russia’s war soon. However, US officials earlier this week said that they saw no signs of Belarus joining the war anytime soon.

Will Belarus join the war?

US intelligence sources have estimated that Russia is currently using nearly all of its available manpower which it gathered before invasion. Putin is indeed desperate for more troops, and although the Belarusian soldiers may have even lower combat morale than the Russians’, they may still be up for consideration by the Kremlin.

There have been several reports of wavering morale within the Belarusian military’s ranks, with some sources claiming that soldiers are telling their commanders that they’re refusing to join in on Russia’s invasion.

The Belarusian regime’s propaganda machine is working hard to maintain a good public image of its armed forces: perhaps to prepare for the drafting of more soldiers, or perhaps to make sure that the public image of the army doesn’t completely fall apart.

This is done by strengthening the narrative of the need for the armed forces “to prevent possible provocations and infiltration of sabotage and reconnaissance groups, weapons and ammunition into the territory of Belarus.” The Ministry of Defence is also publishing videos and pictures trying to describe the soldiers’ everyday lives in a positive way.

Furthermore, the security services of the country are directing themselves increasingly towards labour collectives. The Secretary of Belarus’ Security Council Alexander Volfovich recently visited teachers of higher and secondary educations in the Grodno region, and the riot police OMON were reported to have guarded the entrance to the oil refinery Naftan on the morning of March 23.

The last couple of months of heavily deepened military co-operation between Russia and Belarus is unlikely to be reversed. Since Belarus dropped its Neutrality principle from the constitution, Russia could theoretically place strategic ballistic missiles or even nuclear weapons on its territory. Russia could also deploy “significant signal intelligence and electronic warfare capabilities to Belarus”, according to a briefing by EU in-house security analysts.

Most likely Lukashenko won't attack Ukraine, since this would make Belarus' economy less sanctioned than Russia's. This would be strategically sound both for Lukashenko and for Putin.

Moreover, seeing what’s happened to the Russian soldiers, there’s nothing saying that the Belarusian ones are in any better shape for going up against Ukraine’s territorial defence forces.

It’s more likely that Minsk will keep ramping up its incoherent but ever increasingly serious war rhetoric, while carrying out small symbolic acts such as the expulsion of Ukrainian diplomats over spying allegations, which happened earlier this week.

However, Moscow is clearly pushing Minsk into giving more support for the war effort. What this may be exactly, or whether Minsk would give in if it entailed participating in the invasion, remains to be seen.

With ever expanding sanctions and over 100 companies leaving Belarus since the war started, the country’s economic development has taken a heavy blow.

While the Belarusian economy is in decline, Vilnius seeks to profit from the continuing exodus of IT specialists from the country, since many IT workers from Belarus have fled westwards to Poland and Lithuania.

Belarus’ year-on-year GDP increase slowed down by 1.5 percentage points in February compared to January this year. This was most likely due to Lithuania putting a forced halt to the exports of Belarus state flagship potash producer Belaruskali through Klaipeda harbour, but with the new sanctions against Belarusian banks and state companies since the war started things are unlikely to get any better.

On March 21, independent Belarusian media reported that three out of five mines of Belaruskali had stopped their work due to the lack of export routes; the company was even reported to be taking out loans to pay salaries.

The current EU sanctions alone have made Belarus lose 70% of its exports to the EU. This lack of exports has made hard currency scarce in Belarus’ financial sector. On March 25, Belarus’ national bank lowered the demand for foreign currency holdings by commercial banks from 17% to 16%.

Belarus is China’s third-largest supplier of potash fertilisers and its potash exports to China even saw a y/y increase during 2021. Up until recently, the supply route from Belarus has been safe from sanctions due to it being conducted through the high-speed railway line from China to the EU, which was built as a part of the One Belt, One Road project.

However, since the US has tightened its grip on the sanctions against Belaruskali and other state-owned Belarusian companies involved in the export supply lines of potash, even Chinese imports are being affected. According to Feng Mingwei, executive director at China’s state fertiliser producer Sinofert, current sanctions will not have an impact on China’s supply of potash fertiliser. This was said to be due to sufficient domestic stocks.

Many Belarusians have fled the country since the war started. Some have left due to the increased sanctions making it harder to live, but most due to the fact that they either can’t stand living there knowing the regime actively participates in the war or because they’re afraid of being drafted.

Belarusians in the country try to do what they can to show solidarity with the Ukrainian people. Several sabotage efforts have been made against the state railway system, in order to complicate Russian logistical transport to Ukraine through Belarus. During the night of March 24-25, two signal cabinets were set on fire along an important transport line for the Russian troops, which considerably halted transports.

On Friday, Belarusians were warned by security officials to celebrate the “Freedom Day”, the day when the short-lived Belarusian Democratic Republic declared independence in 1918. The day is heavily associated with today's effectively outlawed opposition, and prison transports were reported to be seen around central Minsk, with soldiers checking the bags and backpacks of passers-by for opposition related material.

Nevertheless, some Belarusians abroad are still confronted for their country’s regime’s actions, which they oppose, and which are widely out of their control.

Stopping accepting Belarusian students to universities or scolding them for not risking months or years in a Belarusian prison won’t affect the regime in Minsk. It will only isolate a population which is in desperate need of western support.

Belarus’ turn to China
8 hours ago
East and West clash in Bulgaria’s snap general election
20 hours ago
Old faces set to keep ruling Bosnia post-election
1 day ago
Georgia’s border clogged with thousands of Russians fleeing the Kremlin’s mobilisation
1 day ago
Meloni won the elections, but her programme won’t make Italy the next Hungary
1 day ago