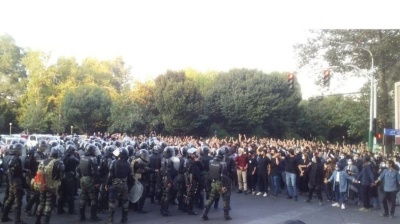 A wave of street protests driven by anger at the death of Mahsa Amini—who last week died after being arrested by the Tehran morality police for not complying with rules on how to wear a hijab head covering—took place across Iran on September 19. Police used tear gas and water cannons to disperse crowds.

“Guidance patrol” police officers were accused of beating Amini, who fell into a coma and was declared brain-dead prior to her death on September 16. Officials denied there was any beating, saying Amini suffered heart problems, but relatives denied that she had any such health difficulties. Amateur video footage shot at Amini’s September 17 funeral in her hometown of Saghez, in Iran’s Kurdistan province, showed mourners chanting “Death to the Dictator”, as well as women taking off their headscarves in a gesture of protest. A photograph of Amini's gravestone was published on social media. Its inscription reads: "You didn't die. Your name will be a code [rallying call]."

As September 19 progressed, there were unverified social media claims of large-scale protests in several cities, with security forces overwhelmed in places and some members of the Basij, a paramilitary volunteer militia, beaten. As has become usual in Iran during any substantial protests, there were reports of the internet going offline or becoming chronically slow in various locations, with officials suspected of throttling the internet in an attempt at hindering the communications of demonstrators attempting to spread the protests.

Unverified footage showed people shouting anti-government slogans near administrative buildings, women taking off their headscarves and throwing them up in the air and an attack on police in Tehran. From the northern city of Rasht, there were unconfirmed scenes of people attacking riot police on the main boulevard, with security forces running in retreat.

Businesses and shopkeepers in cities in the provinces of Kurdistan, West Azerbaijan, and Alborz went on strike and closed their shops in protest at Amini's death despite threats by authorities, Radio Farda reported.

A flash mob in support of Iranian women was announced on social networks, with women shown on camera burning garments and cutting their hair.

The hijab head covering worn by Muslim women was made compulsory in public for Iranian women and girls over the age of nine following Iran’s 1979 Islamic Revolution. Many in Iranian society, both religious and non-religious, have persistently complained that to harass women over the wearing of the hijab is not in line with Iranian culture.

Lately, the head of Iran's judiciary, Gholamhossein Mohseni-Ejeie, suggested that foreign powers were behind a campaign against the compulsory wearing of the hijab. He instructed intelligence agencies to find the "hands behind the naked veil".