Ukraine's central bank devalues hryvnia rate to 36.5686 to the dollar 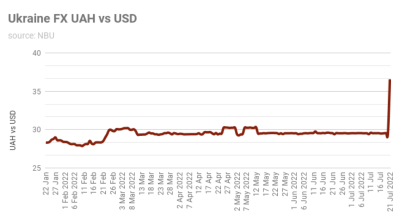 The National Bank of Ukraine (NBU) has devalued the hryvnia by 25% on July 21 to bring it into line with the black-market rate on July 21 as the central bank tries to restore confidence in the sagging currency and head off a looming financial and currency crisis due to a lack of income.

The regulator has kept tight control of the exchange rate since the war with Russia began and has adjusted the official exchange rate of the hryvnia to the US dollar by 25% to UAH36.5686/$ (chart), the bank said in a statement on July 21.

At the beginning of the war, the hryvnia exchange rate was fixed at UAH29.25 per US dollar. However, this exchange rate “no longer corresponds to reality and is gradually losing its role as an anchor for expectations”, said NBU chairman Kyrylo Shevchenko.

According to the National Bank's estimates, the correction of the exchange rate will increase the inflow and, accordingly, the sale of foreign exchange earnings by exporters, minimise the speculative component of the behaviour of market participants and make it possible to stabilise exchange rate expectations, the NBU claims.

“The new exchange rate will anchor the economy and give it stability in the face of uncertainty. Continuation of the fixed exchange rate policy will enable the National Bank to maintain control over the dynamics of inflation, as well as maintain the smooth operation of the financial system,” Shevchenko said in the statement.

The devaluation is the second worrying sign of a growing financial crisis. Ukraine is running out of money. The Ministry of Finance admitted that it is spending $8bn a month on the economy and financing the war, but is raising only about $3bn in tax revenues and from the local bond market. The missing $5bn a month has largely been funded by printing money and tapping the country’s $25bn in hard currency reserves.

The NBU moved to head off problems with the exchange rate by more than doubling the prime rate to a crushing 25% on June 2, and now it has been forced to face reality and devalue the national currency by the same percentage.

Shevchenko has been well aware of the problem and said in an editorial earlier this month that “issuing money is no solution” and called on Ukraine’s international partners to provide financial aid to shore up the country’s finances.

The US has promised $9bn in budgetary funding and the EU has promised mirror funds of €8bn, but as bne IntelliNews reported, both tranches have been caught up in bureaucratic snafus and have yet to be released.

The government is starting to sound increasingly desperate, as it can’t run both the economy and a war without sufficient funds.

“Sad reality is that the FX move plus the debt service standstill announced yesterday are in reality a reflection of the slow dispersion of Western financing to Ukraine,” said Timothy Ash, the senior sovereign strategist at BlueBay Asset Management in London.

Cracks in the system are becoming more visible with each passing week. It looked likely that state-owned gas company Naftogaz was going to default on debt obligations payment on July 20 after the government ordered it to ask for a delay to “preserve cash.”

Ukraine got a reprieve a few days later when the Paris Club of international bond investors stepped in this week and offered some relief, appealing to creditors of Ukraine to suspend the payments until the end of 2023, giving the country more time to obtain the necessary funds, with an option of extending this to the end of 2024.

Kyiv is badly in need of the $18bn promised by the West but its funding needs for the whole year are much bigger. During the Ukraine Reconstruction Conference Ukraine’s Prime Minister Denys Shmyhal said the country would need as much as $65bn this year alone. To put that into context, the last International Monetary Fund (IMF) stand-by agreement was for $5bn paid out in tranches over 18 months.

But so far the West has given Ukraine only $8.6bn since the start of the war, according to Elina Ribakova, deputy chief economist at IIF, who called the amount “peanuts” and has been vocal in calling for the West to accelerate its budget funding help for Kyiv.

“Ukraine has received just over $10bn in budget related financing from Western allies since the start of the war, and yet it’s been running monthly $5bn deficits. So the financing gap has been close to $25bn, and Ukraine has only received less than half of this,” said Ash. “And the other side of the problem is too much of the $10bn received has been in the form of debt, not grants.”

The EU admitted that one of the problems holding up the distribution of cash, as opposed to billions of dollars worth of arms, is the EU remains concerned that any cash sent to Kyiv will simply be stolen. Germany is particularly reticent, as it will have to underwrite most of the EU’s €8bn package.

Previous calls for a Marshall Plan for Ukraine prior to the war were stillborn as European lawmakers had no confidence that any general investment money sent to Kyiv would not be diverted into corrupt schemes by Ukrainian officials and oligarchs. The West has constantly called on Kyiv to tackle its endemic corruption, with little result.

However, Kyiv did finally take action earlier this week and appointed a new Special Anti-Corruption Prosecutor, after a two-year delay. The decision will certainly favour Ukraine, as Western allies have been keen for this position to be filled. Likewise, on July 21 Ukrainian President Volodymyr Zelenskiy ordered the government to set up a central registry to account for all the arms being sent to Ukraine by the West to “reassure our partners,” particularly after the Financial Times ran an editorial worrying that Western arms were being stolen and smuggled back into western Europe recently. Kyiv has denied there is a problem with weapons smuggling.