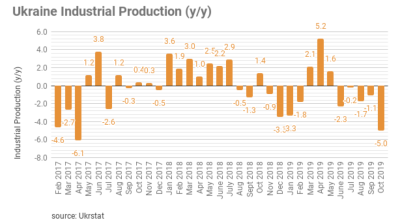 Ukraine's economy stumbled in October, after industrial output plummeted by 5.0% year-on-year after contracting by 1.1% y/y in September, the nation's state statistics service Ukrstat reported on November 22.

The result is a disappointment as the economy has been recovering from the crash of 2014-15, but GDP growth also fell slightly in the third quarter, slowing to 4.2% from 4.6% in the second quarter. The International Monetary Fund (IMF) team that was in Kyiv last week warned that Ukraine’s economic growth was “too slow” and the government needs to focus on reforms to ensure an acceleration. While the economy has been growing it is still growing below potential given the size of the contraction in the crisis years when GDP shrank 17% in the first quarter of 2015.

Ukraine’s industry is heavily dependent on metallurgy and iron and steel prices have fallen this year, hurting the sector.

Output in supply of electricity and natural gas slid 4.4% y/y in October (vs. 1% y/y growth in September).

Evgeniya Akhtyrko at Kyiv-based brokerage Concorde Capital describes the situation in Ukraine’s industry as "devastating". "The unfavourable situation on the global market is slaying Ukraine’s metallurgical sector," she added in a note on November 25.

"Surprisingly, the food industry is unable to demonstrate a positive trend despite a plentiful raw commodity supply, ensured by a record-high harvest for two years in a row." Concorde has downgraded its forecast on industrial output, expecting a 1% y/y contraction in 2019 instead of the previously expected zero growth. Ukraine’s industry increased 1.6% y/y in 2018.

Kazakhstan’s food security hopes for the world undermined by food insecurities at home
Romania’s public debt hits 50% of GDP at end-May
The birth of a Kazakh banking empire: ATF Bank

Romania’s public debt hits 50% of GDP at end-May
13 hours ago
Hungary's automotive industry continues to rebound in June
1 day ago
Russian GDP contracted by 4% y/y in the second quarter of 2022
1 day ago
Serbia’s annual inflation accelerates further to 12.8% in July
2 days ago
Poland’s CPI growth rate picks up just 0.1pp to 15.6% y/y in July
4 days ago