Ukraine expects to more than double its renewable capacity in 2019 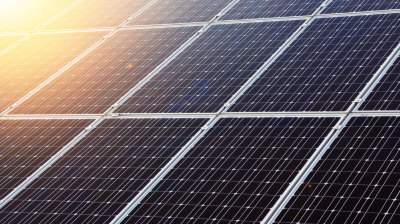 Renewable energy accounts for 4.9% of Ukraine's power generation, but the government plans to increase that to 25% in the coming years
By Ben Aris in Berlin October 22, 2019

Ukraine expects to more than double its renewable capacity in 2019, according to the government's energy strategy, and it has already been investing heavily in the renewable sector. There have been 103 projects commissioned so far and another 112 are in the pipeline, attracted by a green tariff that guarantees producers a fixed price.

The combined capacity of new renewable-energy facilities launched during the third quarter of 2019 alone was 956 MW – a six-fold increase year-on-year, according to figures released in late September by Ukraine's National Commission for Energy, Housing, and Utilities Services Regulation (NCER). Of that, solar power capacity increased five-fold to 780 MW. Renewable energy accounted for 4.9% of Ukraine's overall energy production as of the end of the third quarter, but the plan is to increase its share to 25% by 2023.

Since 2015, Ukraine has installed nearly 4,000 MW of renewable-energy capacities at a cost of $3.7bn of investment, according to Kostyantyn Gura, an adviser to the head of the Ukrainian State Agency of Energy Efficiency as cited by RFE/RL. To reach its goal of 25% Ukraine will need to invest another $30bn, according to Gura.

The share of renewables in the energy mix remains small and Ukraine is still heavily reliant on traditional energy sources, with coal continuing to play an outsized role thanks to the country’s paucity of cleaner energy resources like gas.

Ukraine imported 21mn tonnes of coal in 2018, putting it in tenth place on the International Energy Agency's (IEA's) list of top coal importers. Nuclear is also an important source of power accounting for 55.4% of electricity generated in 2018 – the second highest share in Europe after France (71.5%).

Ukraine is ranked 18th in the Climate Change Performance Index in 2019 out of 56 countries, making it a "high-performing country." However, part of this performance is simply due to the collapse of the economy in 2014, which depressed economic activity. Russia experienced the same effect in 2008 when its emissions halved following a big economic crisis that put factories out of work.

Focusing more narrowly on its renewable energy efforts, Ukraine does less well, ranked at 43, but that is still better than Russia at 60 and Belarus at 52, though worse than Poland at 40 and Kazakhstan at 39, reports RFE/RL.

Globally, the IEA is forecasting double-digit renewable power growth in 2019, driven by solar, which has seen its costs fall by 80% since 2010.

President Volodymyr Zelenskiy has been promoting renewables and suggested reducing the green tariff, the so-called feed-in tariff (FIT), which is currently one of the highest in the world and has a major impact on investment decisions.

Encouragingly Zelenskiy appointed Oleksiy Orzhel as the new minister of energy and environmental protection. Orzhel used to serve as the head of the Ukrainian Association of Renewable Energy.

One of the highest profile projects is a solar farm that has been built in the grounds of the Chernobyl nuclear power station site. The solar station began delivering electricity to Ukraine's energy grid on July 1 last year and 3,800 panels produce 1MW of power, enough energy to light about 2,000 apartments. The $1.2mn project is a joint venture between the Ukrainian company Rodina and Germany's Enerparc AG.

The companies plan to expand the capacity a hundred-fold to 100MW and the next 7MW extension has already been commissioned.

There has also been a slew of wind farm projects that bne IntelliNews  has been tracking in its daily reporting on Ukraine. Amongst the most recent was a project announced in July by US-based General Electric (GE) and Ukraine's LongWing Energy S.C.A. to build the $150mn first phase of the Zaporizhzhya Wind Farm in the Zaporizhzhya region in southeast Ukraine. The 98 MW plant is expected to go online in 2020.

The US Overseas Private Investment Corporation (OPIC) provided financing for what will be GE's fourth wind power project in Ukraine. And Danish-based Vestas, German-based NOTUS Energy, and Irish-based Altostrata were just some of the other companies to announce wind power projects in Ukraine in 2018-19.

Ukraine's own leading utilities operator DTEK, the country's largest private energy company that is owned by Rinat Akhmetov, is a key player in the country's renewable energy sector, accounting for nearly half of all such investments in 2018.