Turkey’s Sabanci to sell its 57.9% stake in Yunsa textiles producer 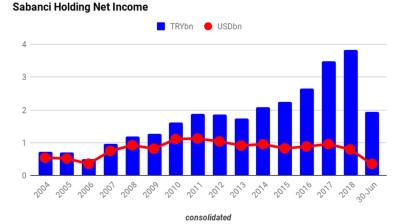 Yunsa makes up 4.6% of Sabanci’s net asset value. Yunsa shares were trading with an EV/Ebitda of 4.7, Is Invest said in its daily bulletin.

Lira at 5.80
The Turkish lira (TRY) was trading around 5.80 at around 17:50 Istanbul time after hitting 6.40 for a few minutes on the Asia market opening last night.

Turkish public lenders managed to take control of the local currency following the ‘flash crash’, while the Erdogan administration was working to convince Turks that there was nothing to make a fuss about. Turks fear a repeat of last summer’s lira crisis when the currency sank into the 7.20s.

Earlier this month, Sabanci sold 41% of construction equipment leasing services company Temsa Is Makinalari (TIM) to another shareholder, Japan’s Marubeni, for an undisclosed sum. By completing the transaction, the buyer increased its stake in TIM to 90% while Sabanci retained a 10% stake.

In May, the conglomerate sold its buses and light trucks maker Temsa to Swiss firm True Value Capital Partners. The sale was made based on a value of TRY375mn after adjusting for debt and cash holdings, and including the 49% stake owned by Sabanci and the other 51% owned by Sabanci family.

Sabanci Holding has controlling interests in 11 companies that are also listed on the Istanbul stock exchange.

The Sabanci family has a 53.9% stake in Sabanci Holding and other Sabanci companies have another 3.3% while the remaining 42.8% is on free-float.

Akbank disappoints
Sabanci’s net income declined by 23% y/y to TRY889mn in Q2. Energy and insurance operations made the largest contributions to the Q2 profit, but the quarterly performance of the group’s Akbank was disappointing.

Assets of Sabanci Holding stood at TRY394bn as of end-June, up from TRY372bn a year ago.

Serbia’s president claims foreign intelligence influence in anti-government protests
2 hours ago
Famous ex-defence reporter arrested, accused of treason
18 hours ago
Turkmen President Gurbanguly Berdimuhamedov takes a holiday as WHO mission finally arrives in Ashgabat
19 hours ago
Violent clashes with police at thousands-strong anti-lockdown protest in Belgrade
1 day ago
Belarus presidential election to have no outside observers, opposition may united by a single candidate
1 day ago