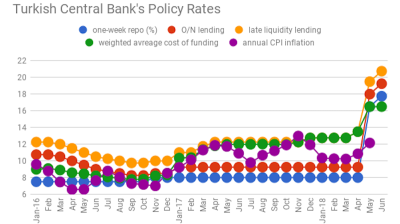 Turkey’s central bank on June 7 substantially surprised markets by announcing a 125-basis point (bp) hike in its main policy rate to 17.75%, a tightening that was in excess of expectations.

The move, which follows on the heels of the 300-bp ramping up of the rate on May 23 amid Turkey’s overheating economy and spiralling double-digit inflation, will be taken as an assertion of its independence. That independence has been severely questioned in recent weeks given political pressure from President Recep Tayyip Erdogan for cheaper money despite the rapid weakening of the Turkish lira (TRY) and his statements that he sees himself at the helm of monetary policy. Whether markets will trust Erdogan to leave the rate-setters to do their work in peace should he be elected Turkey’s first executive president with sweeping powers in the upcoming June 24 elections is a burning issue that remains unresolved.

Commenting on the hawkish decision to hike, Timothy Ash of Bluebay Asset Management, said in an e-mailed note: “Finally, the CBRT [Central Bank of the Republic of Turkey] does the right thing, and surprises on the positive side. Hiking more than expected. This should help improve sentiment, and stabilise the market a bit into the elections.”

“It is quite a positive surprise,” Kaan Nazli, a senior economist at Neuberger Berman, told Reuters. “Nobody was expecting that. That will give them a lot of credibility ahead of the election.” He added: “The worries will remain that once Erdogan renews his term he will be more interventionist in terms of central bank policy.”

“Is this the start of a new era of Turkish central bank policy—actually moving ahead of the market? Let’s hope so,” Nigel Rendell, a senior analyst for EMEA at Medley Global Advisors, was quoted as saying by Bloomberg. “Positive impact on the lira is seen as the repo rate rises. How things develop on both the policy front and for the lira longer-term will depend on events after the June 24 elections and whether Erdogan gives the CBRT latitude to act independently.”

Monetary curve
Explaining its move, the CBRT’s monetary policy committee (MPC) said in a statement: “Despite the mild outlook for demand conditions, elevated levels of inflation and inflation expectations continue to pose risks on the pricing behaviour.”

The MPC emphasised that further monetary tightening would be delivered if required. To convince the markets that despite the political pressure it is going to stay ahead of the monetary curve, it will need to make good on its word. A collapse back to somewhere near the all-time low lira vs the dollar rate of 4.9294 seen on May 23 would be a disaster and would demand even more extensive rate increases to regain control of the currency.

Ahead of the MPC meeting, analysts were divided over whether the regulator would move to tighten rates again, but nobody was forecasting something of the magnitude of 125bp.

Market reaction to the rate increase was extremely positive at first glance. The TRY gained 1.75% d/d to trade at 4.4757 against the USD as of 15:30 local time (it had slipped to 4.4883 by 17:50) while the benchmark BIST-100 Turkish stock market index, which had been falling at a fast clip since last week, was up 1.82% to 98,414. Banking shares gained 3.4%—anxieties over the alarming descent of the TRY prior to the latest rates action led to consternation among economists that Turkey faced a currency-and-debt crisis that would leave lenders exposed to critical levels of problem loans.

As of June 7, 17 days before the crucial elections, it seems the MPC may have secured a strong buffer against any further market fluctuations, especially in the FX markets, which could substantially affect voting behaviour. However, in the medium term, the impact of high interest rates on the growth outlook for the Turkish economy will have to be assessed.

Since April 24, the MPC has delivered rate rises that add up to a combined 500-bp increase in its main funding rate.

The moves will help address concerns that Turkey is not taking enough action to tackle economic imbalances that include one of the worst current account deficits in the world and a widening budget deficit. But the CBRT is also joining a trend now being seen in other key emerging markets. Central banks in these markets have been hiking interest rates with more vigour than investors expected, partly because their economies need protection against a rising dollar and capital outflows prompted by the US Fed’s own tightening. India’s central bank this week raised its benchmark for the first time since 2014, joining peers in Indonesia, Mexico and Argentina. Brazil is now also coming under pressure from investors to push up its rates.