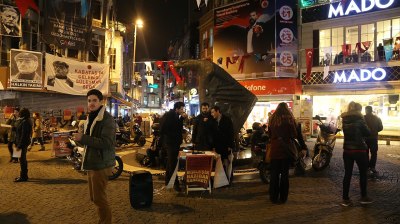 Activists in Besiktas Carsi, Istanbul. Turkey may be edging towards another political crossroads. If there's another run on the lira, it might get there that much faster.
By bne IntelliNews February 7, 2020

The markets finally hit the Turkish lira (TRY) for six again on February 7, despite state banks reportedly this week selling more than $4bn in an effort to artificially keep it behind the psychologically important boundary.

Turkey’s embattled currency closed the day and week at Turkish lira (TRY) 6.0150 to the USD, 0.46% d/d weaker. It was the first time the 6-per-dollar mark had been breached since late May. At one point the lira slipped by as much as 1% to 6.0482, with losses accelerating after a better-than-expected US jobs report lifted the greenback.

The currency has been dragged over the edge by an accumulation of negative factors that mounted up as the week went by.

On February 7, news spread that Finance Minister Berat Albayrak had indicated that the central bank could continue cutting rates—despite aggressive easing that has already brought Turkey’s benchmark rate to 11.25% from the 24% recorded last July—while at the same time traders dealt with persistent jitters that the Turkish military in Syria could be sucked into more confrontation. The worst-case scenario would involve a showdown with both Syrian and allied Russian forces. In the eastern Mediterranean, meanwhile, French warships are being deployed to back Cyprus in its row with Ankara over what it says is illegal exploratory drilling for gas and oil by Turkey off its coast.

Albayrak said state banks have agreed to bring annual loan rates down to an 8-10% range. Deposit rates on local lira accounts may be poised to slide further into negative territory. Official annual inflation stands at 12.15%. The finance minister says he is confident this year will bring it to single digits, but the central bank’s inflation targeting is widely seen as appalling and the consensus view is that it has lost its monetary independence to the executive presidency.

The lira has shed around 36% of its value in two years, with the currency crisis in the summer of 2018—when the currency fell to historic lows in the 7.20s—having tipped Turkey's economy into a recession that the Erdogan administration is attempting to quickly bounce back from with an emphasis on pump-priming growth, delivering cheaper money to consumer and business pockets.

Foreign investors, meanwhile, have been dumping Turkish government bonds. They have been unnerved by government efforts to clamp down on financial markets, with fears that officials’ efforts to force the lid down on potential instability could simply be storing up trouble for later. Bloomberg reported four traders said to have knowledge of the matter as saying state banks sold more than $4bn across this week to defend the lira, with the scale of the intervention picking up dramatically late on February 7. Both HSBC and Unicredit could be poised to exit Turkey given the hits they have taken amid the turmoil and lack of confidence in the Turkish economic outlook.

In a February 4 note to investors, Timothy Ash at BlueBay Asset Management in London said: “Turkey is proving pretty difficult to figure out these days—most foreigners have I think given up, which is reflected in positioning data which shows the lightest positioning in stocks/bonds for a decade or more—and over USD3bn in net bond outflows despite over 1,000bps of spread compression over the past year (almost unheard of in the Turkish context).”

The lira, also to a modest degree destabilised by fears that China’s coronavirus woes could yet hit global markets hard, has enjoyed a broader stabilisation since May, partly thanks to the state’s interventions. But its one-month implied volatility jumped in late-day trading on February 7 to its highest level in two weeks.

S&P Global Ratings last week classified Turkey’s foreign-currency regime as a “managed float”, citing the state banks’ offloading of dollars and limits introduced by regulators on local banks’ derivative positions with non-residents, designed to stand in the way of short sellers. Let’s see what the Erdogan officials can manage from here on in.

One possible jarring picture was painted by Ash in his note. He observed: “You might have thought continued dollarization would be a constraint on further rate cuts—but despite near record high FX deposits (~USD190bn), the CBRT [Central Bank of the Republic of Turkey] has been happy to manage these FX deposits, with state owned banks and the CBRT swapping these for lira, and then using the FX liquidity to support the TRY in FX markets, and also providing a bid for credit, thereby reducing perceived credit risk.

“Worryingly large open short FX positions must be being opened within the system—within the state-owned banks, while there now has been much debate about the ‘quality’ of CBRT FX reserves, and particularly net reserves. I guess as long as the TRY is being managed and remains stable this is not a problem, but if we see another bout of FX weakness, the damage then revealed in the banking sector would be ugly. I sense that the CBRT has been using Lebanese style ‘financial alchemy’ to manage recycle FX deposits to defend the lira.”