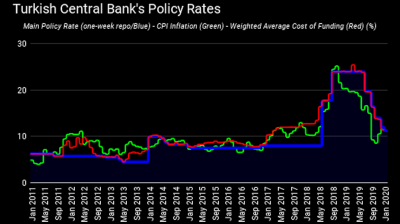 Analysts saw the Central Bank of the Republic of Turkey (CBRT) bowing to Turkish President Recep Tayyip Erdogan on January 16 by cutting its benchmark one-week repo interest rate by another 75bp to 11.25%.

Erdogan is under political pressure as a growing number of rivals put their heads above the parapet with voters disillusioned by the economic misery Turkey experienced following the 2018 currency crash. The president, it appears, is intent on credit-fuelling a fast rebound of the economy even at the risk of rebuilding up longer-term imbalances that could lead to another boom-to-bust.

In a note to investors following the interest rate announcement, entitled “CBRT bows to Erdogan but will have to backpedal”, Justin Tuvey at Capital Economics said: “It seems that the central bank is doing all that it can to meet President Erdogan’s demands for lower interest rates… We think that the one-week repo rate will be lowered to 9.50% at the next couple of meetings.”

He added: “[…] our GDP Tracker points to growth of close to 5% y/y [in 2020] … but there are already signs that strong growth is driving a fresh build-up of macroeconomic imbalances. The current account has started to deteriorate and we think that, after posting a surplus of 0.5% of GDP, it will swing back into a deficit of as much as 3.5% of GDP this year. This will cause the lira to come under pressure—we forecast it to fall by 20% against the dollar to 7.50/$ by year-end.”

“Cut out the middle man”

The widespread view that Erdogan is running monetary policy in Turkey prompted a wry remark from Timothy Ash at BlueBay Asset Management, who said in a note: “Cut out the middle man. Not sure why Turkey does not follow Oman, where the Sultan is also head of the central bank. He sets policy, in any event.”

Reuters reported Per Hammarlund, chief emerging markets strategist at Swedish bank SEB, as saying that the CBRT “has to tread somewhat carefully from now on given the increase in inflation. But I think the message from the administration has been quite clear, they want single-digit policy rates and they are going to get it. Quite honestly I think they can get away with it for a while. The lira is still not particularly over-valued.”

In a statement, the central bank called the cut “measured”. It added that inflation was on a path that was “broadly in line” with its earlier forecast of 8.2% by year end. “The current monetary policy stance remains consistent with the projected disinflation path,” the bank said.

There remain considerable doubts among economists as to the approach taken by Turkey’s official statistical body to calculating inflation, with opposition politicians complaining inflation in reality is a good deal higher than presented.

The rate cut—which brings the CBRT’s easing since its last central bank governor was fired in July last year to 1,275bp—was not unexpected. Six of the respondents in a Reuters survey of 21 economists predicted a cut taking the benchmark rate to 11%. Seven expected a rate cut of some sort. The median estimate was for a cut of 50 bp, while the biggest expectation was for a 125-point cut. Another dose of monetary loosening n also anticipated by most analysts polled by Bloomberg.

Turkey’s headline rate of inflation jumped from 10.6% y/y in November to 11.8% y/y in December, meaning that with the latest easing from the central bank real rates have turned negative.

“More rate cuts are likely in the next few months,” said Tuvey. “But the strong economic recovery will cause inflation to rise further, the current account deficit to deteriorate and the lira to fall. As a result, we think that the CBRT will be forced to hike rates later this year.”

The Turkish lira (TRY) strengthened by around 0.5% following the rates decision suggesting that the markets were poised for more aggressive action, Tuvey added.

The increase in headline inflation was mainly due to higher food and transport inflation, said the analyst, “but there were also signs that underlying price pressures are building—core inflation crept up to 9.8% y/y last month”.

With real interest rates having dropped back sharply in recent months, a big pick-up in credit growth should drive gains in industrial production and retail sales, with data released earlier this week suggesting that the economic recovery gathered pace in Q4.

But there are already dark clouds on the horizon. “A weaker lira is one factor that will cause inflation to steadily rise over the coming months. Whereas the central bank forecasts inflation to drop back to single digits, we think that it will be close to 15% y/y by the end of 2020," said Tuvey.

He concluded: “Accordingly, we think that the central bank will be forced to shift tack and hike interest rates in the second half of this year. We forecast the one-week repo rate to end this year at 12.50%. In contrast, the consensus anticipates rates finishing the year at around 10.00%.”

Serkan Gonencler, an economist at Istanbul’s Seker Invest said in a note: “All in all, we sense that the CBRT remains inclined to continue easing the policy rate as long as the global outlook remains positive. In any case, the fact that the real interest rate (ex-post) is now negative indicates that upcoming (potential) rate cut(s) are more likely to be in 25-50 bps increments.

“It should also be noted that given the potential for a reversal in global market sentiment with the abundance of geopolitical risks and risks to global growth, the TRY may now be more susceptible to a negative shift in risk appetite. The inflation trend will also be critical in that stance; if in early 2020 CPI inflation does not behave as the CBRT expects, any potential upside pressure on the TRY may be exacerbated.”

Indicating that ordinary Turks are generally yet to buy into the idea that ‘Erdoganomics’ will restore and anchor prosperity, central bank data on January 17 showed foreign currency deposits and funds, including precious metals, held by Turkish individuals and corporates rose to a record high of $196.06bn as of January 10. The central bank's gross forex reserves rose to $78.27bn as of the same date, from $77.95 billion a week earlier.