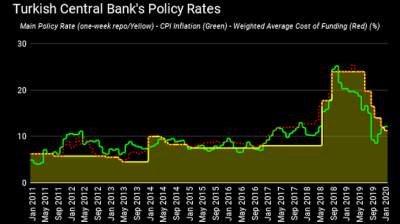 The official Turkish inflation rate in January crept up a bit more than expected to 12.15% y/y from 11.8% y/y in January, leading some observers to speculate that the central bank might halt its monetary easing—but others, such as Capital Economics, said the figure released on February 3 was unlikely to sway the central bank from its rate-cutting path given the pressure from the Erdogan administration.

With President Recep Tayyip Erdogan facing a displeased electorate following Turkey’s currency crisis and recession-ailed 2019, his officials are intent on securing more cheaper money to drive a fast economic recovery. In a note on the latest inflation figures offering a “non-consensus view”, Jason Tuvey at Capital Economics said he expected “policymakers to cave into pressure from President Erdogan” and this month bring in another cut—probably by around 75bp—to the benchmark rate. The rate currently stands lower than inflation at 11.25% following aggressive easing since it stood at 24% as recently as last July.

“The CBRT [Central Bank of the Republic of Turkey] is likely to pin further monetary easing on its expectation that inflation will fall back over the rest of this year. But this is based on some far-fetched assumptions and we think inflation will actually rise to close to 15% y/y by year-end,” said Tuvey.

He added: The lira is likely to come under pressure too. Against this backdrop, the CBRT will probably be forced to reverse course and we forecast the one-week repo rate to be hiked again later this year, reaching 12.50% by end-2020 and 16.00% by end-2021.” 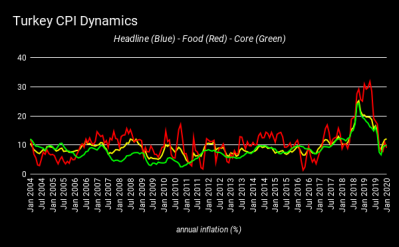 On a month-on-month basis, which tends to be volatile due to seasonal effects, consumer prices in Turkey rose by 1.1% in January. A breakdown of the data showed that food prices dropped back from 10.9% y/y in December to 9.0% y/y last month, which directly shaved around 0.4pp off the headline rate. This was more than offset by pickups in transport, clothing and housing and utilities inflation, noted Capital. Meanwhile, the central bank’s preferred measure of core inflation crept up from 9.8% y/y in December to 9.9% y/y in January.

Mohammet Mercan at ING in Turkey said in a note to investors: “Overall, despite a range of administrative price and tax measures, monthly inflation turned higher than expected in January and maintained the uptrend.

“Going forward, any reversal in unprocessed food inflation which was one of the major drivers of the disinflation process last year should be a risk factor, while exchange rate developments will remain key for the inflation outlook. The latest data along with low real rate buffer and geopolitical risks should further contribute to the central bank’s cautious stance.”

The CBRT is sticking to its view that Turkey’s annual inflation will drop toward 8.2% by year-end, keeping the door open to some more policy easing.

The lira traded flat after the release of the inflation data at 5.98 against the dollar. 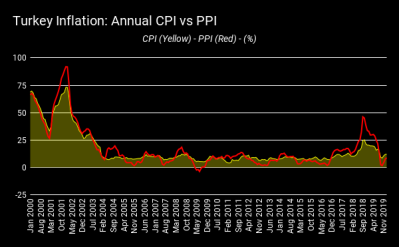 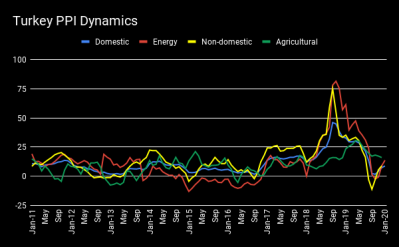 Major fighting erupts between Armenia and Azerbaijan over Nagorno-Karabakh
5 hours ago
TURKEY INSIGHT: Follow the (hot) money
2 days ago
Lukashenko isolated himself from the rest of the world with a secret inauguration
2 days ago
Iran’s oil minister openly admits forging export documents to dodge US sanctions
2 days ago
“Putin’s chef” follows through on threat to bankrupt Navalny, bailiffs seize his apartment
2 days ago