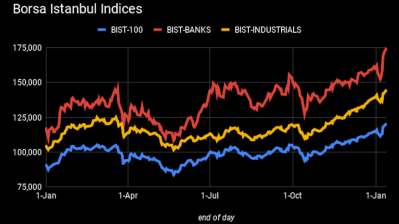 “The best laugh [on January 9] was provided by the congenitally unfunny Turkish president [Recep Tayyip Erdogan] who kept his face straight on ‘Working Journalists's Day’ while intoning ‘The existence of a press, which is effective and capable of informing the public without any restrictions, is a prerequisite for a democratic and transparent society’, which was probably news to the 108 journalists in prison, the 172 facing charges or the 60 journalists fined last year [in Turkey],” Julian Rimmer of Investec said on January 10 in a note to investors.

“Borsa Istanbul was very strong [on January 9]. The rally was to some extent widespread across most [markets] because of the perceived de-escalation in [Middle East] tensions but the immediate catalysts for the Turkish outperformance were the upbeat forecasts for 2020 from GARAN [Garanti BBVA bank] and AKBNK [Akbank]. The extent of the institutional underweight in Turkey may suggest the [market] could easily rise further in the short term before structural impediments reassert themselves. There is rotation into the lower quality banks [on January 10]. [Turkish central bank] meets [on January 16] and may be tempted to cut again,” he added.

The analyst presentations by AKBNK GARAN and ISCTR [Isbank] revealed the banks’ management teams as more positive than the market on loan growth, return on equity (ROE) and non-performing loans (NPL) formation “but then again, they would be, wouldn't they?” observed Rimmer.

He added: “Forecasting low growth or an increase in problem loans would definitely have attracted the attention of the banking regulators and the govt and the large private banks know they must avoid criticism either direct or oblique. I read the broker GARAN's strategy note for 2020 and was struck by its almost Panglossian view of Turkey's prospects for the year ahead. It was like a world I dream about. And then, in dreaming, The clouds methought would open and show riches Ready to drop upon me, that when I waked I cried to dream again.

“Then you read on the same day that according to the Intl Observatory on Human Rights, Turkey is still the largest gaoler of journalists in the world and you realise that GARAN's strategist, a man I've met, like and respect, probably doesn't have much choice in his opinions. Still, the banks are cheap and if Turkey can avoid stepping on Erdogan's landmines, there could be a significant rerating. The banks trade on ~0.6x p/bv and they could easily trade on 1x p/bv if rates and inflation were to come down to single digits. Those are very large subjunctives, however, and Turkey remains hostage to the capricious monetary policies of the Tyrannical Tache and reliant on the continuance of accommodative interest rates globally. There's $25bn of bad debt in Turkey as a direct result of Erdogan's economic stewardship since 2017. AKBNK has the plumpest cushion while HALKB [Halkbank] is still the most vulnerable and has the added threat of a US-imposed penalty for sanctions-busting. Intl ownership of Turkey's stock and bond mkts hover at multi-year lows so Borsa Istanbul can gap in these periods when the seemingly permanent crisis abates briefly,” Rimmer concluded.

Turkish stocks provide a strong investment case, in particular when it comes to Turkish banks, as VTB Capital believes volatility over geopolitical tensions only offers trading opportunities, Akin Tuzun of VTB Capital said on January 10 in his monthly Turkish equities monitor entitled “January to be strong despite geopolitical risks”.

The low global interest rate environment (with the US 10-year as a proxy) continues to support low real rates in Turkey, according to Tuzun.

“Amid easier financial conditions and ample liquidity, rising geopolitical tensions leave markets unfazed… This trend reflects the ongoing disconnect between political/geopolitical risk and capital markets awash in abundant central bank liquidity. Financial conditions remain very supportive—in the U.S., they are the easiest they’ve been since July, while EU financial conditions have not been this accommodating since 2014,” the Institute of International Finance (IIF) said on January 9 in a note entitled “Liquidity Trumps Geopolitics”.

“With the global bond universe fast approaching $120 trillion, growing reliance on debt capital markets in a low interest rate environment has been one of the most striking features of the post-crisis era. Equally striking has been the increased access to debt capital for emerging markets—EM debt now accounts for 25% of all global debt, up from a precrisis 10%... One result is that the volume of negative-yielding bonds reached a staggering $11.5 trillion as of end-2019— nearly 10% of all global bonds—despite the steadily growing supply of new debt issuance,” the IIF added.

“[L]ong-standing vulnerabilities in [Turkish banking] sector still linger… the [Turkish] banks are by no means in rude health,” Capital Economics said on January 10 in a note entitled “Risks still prominent in Turkey’s banks”.