The third round of Russo-Ukraine peace talks break up with no agreement, but some progress 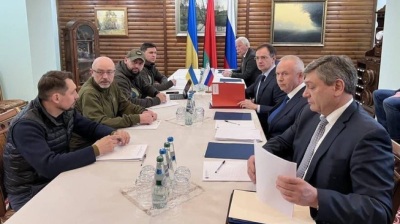 The third round of Russo-Ukraine peace talks break up with no agreement, but some progress. / wiki
By bne IntelliNews March 7, 2022

The third round of Russo-Ukrainian peace talks held on the border with Belarus broke up after three hours with no breakthrough but made some progress.

“This is really hard work,” one of the Russian delegates told the local press after the meeting ended, adding that the Russian expectations had not been met. “We hoped they would sign some the documents but they have just taken them back to Kyiv for consultations.”

One of the positive steps forward made by the delegations was they worked out the logistical issues with mooted humanitarian corridors out of the conflict zones, which they hoped would come into operation on March 8, International Women’s Day.

Previous agreements to set up humanitarian corridors at the second meeting in the Belarusian border town of Gomel on February 27 had also tried to establish safety routes for civilians out of cities but were unable to be implemented as Russian troops failed to pause shelling.

Disagreements remained over the routes the corridors will offer. The Russian side proposed corridors that exited cities such as Kyiv and Kharkiv, but crossed the borders into Belarus and Russia, whereas the Ukrainian side wanted routes that lead to peaceful parts of Ukraine in the centre so refugees can travel on to exit the country over the western borders into the EU.

Less progress was made on the main substance of the talks. The Russian delegation arrived with four points that they are demanding the Ukraine delegation concede:

Notably the Russian delegation seems to have dropped the demands that Ukraine “denazify” the country and “demilitarise” Ukraine. The Russian Foreign Ministry said in a statement on March 7 that demilitarisation has already been achieved.

The Ukrainian delegation has suggested since the second meeting that Bankova is “open to the idea” of returning to neutrality, which was enshrined in the constitution until 2014, until the post-Euromaidan revolution government changed the constitution to make Nato membership a national aspiration.

Ukrainian President Volodymyr Zelenskiy has become visibly angry and disillusioned with the lack of support that Ukraine has received from Nato. In a video address on March 5 he lambasted Nato for not sticking to its own principles and for failing to come to Ukraine’s aid by closing the skies to Russian aviation.

"All the people who will die starting from this day will also die because of you. Because of your weakness, because of your disunity," a furious Zelenskiy added, going on to say that the only thing that Nato has sent Ukraine is 50 tonnes of diesel fuel.

As Nato has not offered Ukraine a roadmap to Nato membership, despite Zelenskiy's passionate appeals, and clearly has no intention of doing so, neutrality is the next best option. A member of the Ukrainian delegation suggested that Ukraine could become neutral again and then sign bilateral security deals with other Nato members like the US and the UK.

The Russian delegation said they were pleased and encouraged by Kyiv’s willingness to adopt neutrality.

More difficult are the demands that Kyiv recognise the Crimea as Russian sovereign territory and the Donetsk and Luhansk regions as independent. Bankova is highly unlike to concede either of those two points, as both require a government to give away territory, something no government is ever willing to do.

However, the Ukrainian delegation did not give a flat no and instead took the Russian documents back to Kyiv for consultations. Both sides agreed to meet again for a fourth round of talks in the near future.

Zelenskiy now finds himself in a very difficult position. Russian President Vladimir Putin's rapid escalation to a full invasion of Ukraine after the two rounds of diplomacy failed in January and February, bypassing any intermediary escalation steps, makes it clear that he will carry out the implicit threat of launching a full-scale assault on Kyiv, or an equivalent extreme measure, should these talks also fail.

In this sense the current talks in Gomel on the Belarusian border are not negotiations at all but simply the delivery of Russian demands that the Ukrainian side can either accept or reject.

In a phone conversation with French President Emmanuel Macron last week Putin said that the Ukrainian side can either accept Russia’s demands, “or we will take them militarily.”

If Bankova accepts Putin’s demands then the Russians have promised to stop the military campaign and withdraw. If Bankova refuses then Putin is threatening a full-scale and bloody escalation until Ukraine’s military is defeated and the same demands are presented again unchanged.

The two sides are expected to meet again in the coming days and the Ukrainian delegation said it hopes more progress will be made at the next meeting. In the meantime, the number of rocket attacks has slowed although residential centres are still being targeted and casualties are being incurred by both sides.