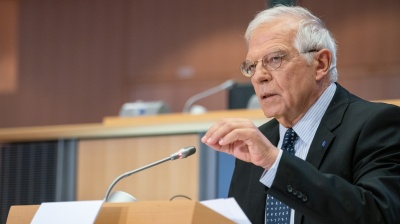 The EU’s foreign policy chief Josep Borrell was slated by critics for failing to hold Russia to account over the jailing of anti-corruption activist and opposition politician Alexei Navalny and handing the Kremlin a PR gift during his trip to Moscow on February 5.

The EU has said little following Navalny's arrest on January 17, saying it wanted to wait until the court hearing last week that sentenced Navalny to 2.8 years in jail.

Borrell was expected to lay down the law to Russia during his meeting with Russian Foreign Minister Sergei Lavrov, but it appears Borrell came to the meeting unarmed. “Not a single European country has proposed imposing sanctions on Russia,” the EU’s top diplomat reportedly said.

The optics of the trip were also particularly poorly thought out. Borrell gave a joint press conference with Lavrov just as across town a fresh court hearing had started where Navalny was accused of defaming a war veteran in public comments – a charge that carries up to two years in jail.

The Kremlin is widely expected to add new sentences to the 2.8 years Navalny already has to serve to ensure he remains behind bars during the 2024 presidential elections.

Borrell clarified there is no formal proposal for new European Union sanctions on Russia after the jailing of Navalny, but EU foreign ministers and leaders will “continue to discuss relations with Russia.”

“A full and transparent investigation would help clarify what happened in the case of poisoning of Navalny,” Borrell told a news conference in Moscow. “As for the sanctions, there is no proposal for the time being by any member state. EU leaders will have in March an important discussion about relations between EU and Russia and my visit here is part of the preparations of this debate,” Borrell said.

Moscow has refused to discuss Navalny’s case, saying it's a domestic affair. Russian presidential spokesman Dmitry Peskov said ahead of the trip that he hoped the EU would not try to link Russia-EU relations with Navalny's jailing. Moscow stands "ready to do everything" to develop ties with Brussels, but the Kremlin is "not ready to listen to advice" on the issue of Navalny, he said.

Social media lit up with indignation at the soft words.

“Holding a joint press conference with Min #Lavrov at very moment when @navalny was being brought for another trial confirms the very bad timing of @JosepBorrellF visit to Moscow. Instead of bringing #Navalny back home, Mr Borrell has whitewashed #Putin's regime,” EPP Group, a large fraction in the European Parliament, said in a tweet.

Many commentators have equated Navalny’s arrest, which has sparked the largest mass protests in almost a decade, to the mass protests in Belarus that are trying to oust that country's self-appointed President Alexander Lukashenko.

In that case the EU was united and imposed sanctions on most of Lukashenko’s elite, including the president himself. Russia’s critics have called for similar sanctions to be imposed on Russia. Team Navalny has also published a list of 35 top officials and oligarchs that it says should be sanctioned.

For its part the Kremlin has been signalling that it would like to calm the tensions with the West, and rushed through the prolongation of a new START III missile treaty with US President Joe Biden on January 27.

Lavrov said during the joint press conference: “Lack of normalcy in relations between Russia and EU, [the] two biggest Eurasian actors, is not a healthy situation, benefits no one and is the main issue to be addressed.”

Biden talked tough on Russia in a speech on February, saying that the US would not “roll over” on Russian aggression any more, and that “diplomacy is back.” However, Biden has also made it clear that arms control is also now high on the agenda, something that Putin also wants, giving the two adversaries some common ground for negotiations.

Part of Europe’s problem with Russia is it is torn between being heavily dependent on Russian energy and raw material imports and its desire to hold Russia to its liberal values. At the same time, Russia is the largest consumer market in Europe and many of Europe’s leading and largest firms are already heavily invested there, from the French supermarket chain Auchan through the German car and engineering companies BMW and Siemens.

On top of that, financial investors are also heavily committed to the Russian securities market. Russia’s Ministry of Finance ruble-denominated OFZ treasury bills market has seen heavy inflows in 31 of the last 32 weeks as central banks in the developed world have cut interest rates to zero. Yield-hungry investors are overweight with OFZs, making it doubly difficult to sanction Russia, as targeting the country's bond market – one its most vulnerable areas – will boomerang back and hurt Western pension and insurance funds.

Borrell also praised Russia on the success of the Sputnik V vaccine that a peer-review paper published in the UK’s The Lancet confirmed is one of only three accredited vaccines with an efficacy rate of over 90%.

The Kremlin was heavily criticised during the development of Sputnik V for rushing through certification and was suspected of lying about its test results. However, now that Europe finds itself short of enough vaccines to inoculate its own population, it is in talks with Russia to certify Sputnik V and perhaps order the vaccine for use at home, which would be a huge PR coup for Putin should it happen. The EU had already begun the certification process for Sputnik V in the middle of January.

“I remember numerous public facepalms in Brussels when Trump walked into Putin's trap in Helsinki,” tweeted Maksym Eristavi, a Ukrainian activist. “But now you have your own 'Helsinki moment', the EU. Congrats.”

Foreign ministers from around the EU have agreed to meet again on February 22 to discuss "possible further action" if Navalny is not released.