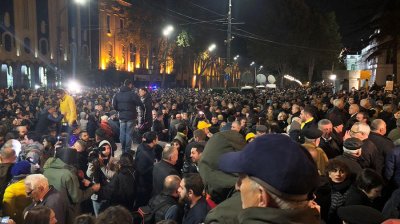 Scene at protest rally on November 15 on Rustaveli Avenue in front of Georgia's parliament building.
By Iulian Ernst in Bucharest November 15, 2019

Demonstrations involving thousands were seen in the centre of Tbilisi at the end of this week as Georgians expressed their anger over their parliament’s failure to adopt a constitutional amendment on a transition to a voting system with proportional representation. November 17 could bring even bigger protests if the opposition is successful with a campaign to get voters to take to the streets.

Crowds of opposition supporters and civil society activists on November 14 formed outside the parliament building and blocked traffic on the capital’s main thoroughfare. Frustrated that the legislation had not been adopted in time for the run-up to the 2020 general election, they demanded the Georgian Dream-led government's resignation and snap parliamentary polls. Changing the electoral system from a mixed system to a proportional one was a key demand of the thousands of demonstrators who rallied for weeks in Tbilisi in June and July. More than 240 people were injured in those demonstrations after riot police responded with rubber bullets and water cannons when a crowd attempted to storm the parliament after anti-Kremlin sentiment spread in response to the visit of a Russian MP who was offered the speaker’s chair for an address.

The constitutional amendment fell after attracting only 101 votes—that was 12 short of the three-quarters majority needed for such legislation to pass. All 44 opposition MPs supported the bill, which would also introduce a zero-percent entry threshold for securing representation in parliament and forbid the forming of election blocs for campaigns. Three Georgian Dream lawmakers voted against it and 37 abstained. Deputy Speaker of Parliament Tamar Chugoshvili, and 11 fellow MPs quit the Georgian Dream ruling coalition after the rejection of the bill, Agenda.ge reported.

Co-rapporteurs on Georgia for the Parliamentary Assembly of human rights, democracy and rule of law body Council of Europe (PACE) released a joint statement after the amendment was defeated. It was signed by Titus Corlatan (Romania) and Claude Kern (France).

"We regret the lack of support for the bill. The introduction of a proportional representation system was a call from all stakeholders and its introduction was long overdue. Given the consensus of all stakeholders on the need to introduce a proportional system for the 2020 parliamentary elections, the bill failed to understand [the situation]. This is a step backwards," said Corlatan and Kern.

The co-rapporteurs called on all the political parties, and especially Georgian Dream, to consider whether the amendment could be reflected in the constitution before the general election. 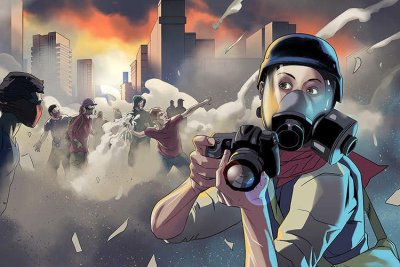 CPJ.org has issued a safety advisory for journalists covering the protests in Tbilisi.

Ambassador of the European Union to Georgia, Carl Hartzell, said the EU has refrained from voicing an opinion on whether or not a proportional representation system would be the better option for Georgia in the 2020 general election since selecting a voting system is primarily the choice of the Georgian people and political parties

But Hartzell added: "Since summer, however, there has been a political consensus and a joint commitment to work in this direction. Against this background, I see a clear risk that going back on this commitment at this stage would be seen as breaking the trust among the political parties, the trust with wider segments of the population, and to again increase the polarisation in the run-up to the 2020 elections. I hope the parliament will take this into account in their vote later today."

US Congressman Adam Kinzinger, one of the initiators of the US Support Act to Georgia, responded to the voting down of the constitutional amendment by saying it was a gift for Russian President Vladimir Putin.“The failure will destroy the progress Georgia has made to reach complete independence and separation from an aggressive, encroaching neighbor in Russia,” Kinzinger said.

“During my visit to the country last week, I was pleased by what seemed to be the inevitability of this reform package. This commitment was made to the international community, and most importantly, to the Georgian people. It is my hope that this situation can be fixed—and fixed very soon,” he said.

Irakli Kobakhidze, a member of the parliamentary majority and a former speaker of parliament who resigned during the summer protests, said it was now impossible to bring the draft constitutional law back for another vote. According to him, to do this it would be necessary to re-initiate the draft law—but in line with stipulations concerning constitutional amendments, it must be followed by a relatively complex procedure.

“When it comes to constitutional amendments, signatures should be collected. Either the signatures of 200,000 citizens should be collected, or [those of] 76 MPs. Thereafter, there should be a general public debate, then a committee hearing, and then three hearings at the plenary session of parliament. I have heard the speech of one of the party officials. There is no such norm in the regulations. The only procedure is to initiate compliance with all rules,” Kobakhidze said.

The main and most radical opposition party, United National Movement (UNM), announced massive protests for November 17. Protests that have taken place so far have included demonstrations organised through social media by civil society groups such as Change. Protests have broken out in front of the parliament building and outside the residence of Georgian Dream party chairman Bidzina Ivanishvili, an oligarch and former PM who is Georgia’s richest individual and is often seen as the country’s de facto leader.

A public meeting is to be held on Rustaveli Avenue on November 17 at which speakers will call for the concluding of “Ivanishvili's government” as soon as possible and the establishment of democratic principles in Georgia, the UNM announced.

"Early parliamentary elections should be held in Georgia under an interim government and impartial election administration," it added in a statement.

"Today, oligarch Ivanishvili has once again undermined Georgia's reputation and the dignity of the Georgian citizen. That is why the United National Movement, with all opposition political parties and civil society, stands firm against Ivanishvili,” the party also stated.

“The opposition did everything to break the fragile consensus that our team had in the summer,” Ivanishvili stated in a message related to the developments. He blamed the opposition parties for not having attended talks initiated in 2017 for the new Constitution and for constantly harassing the ruling party’s lawmakers. “There was never a consensus for a proportional vote system among the Georgian Dream party,” Ivanishvili said, claiming that he personally has constantly advocated for this system.

“As the leader of a governing political force, I reaffirm my support for the transition to a proportional electoral system in 2020, and I sincerely regret that this has not happened—with my team and government, I can guarantee that Georgia's democratic development process will be irreversible. Free and fair elections in 2020 will be a precondition for this and a prominent example," Ivanishvili added.

As the Constitution of Georgia stands, proportional representative system elections will be held from 2024, but protesters and the opposition parties have asked for a quicker realisation of the provision. Pressed by the protesters who occupied the streets of Tbilisi during the summer, Ivanishvili accepted the request for a 2020 introduction, but insisted on a no-threshold provision for representation in parliament, compared to the constitutional regulations that institute a 3% threshold.