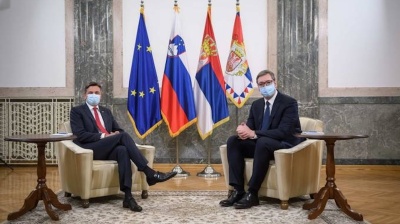 By Valentina Dimitrievska in Skopje May 16, 2021

Slovenian President Borut Pahor said on May 14 in Belgrade that it would be "great" if the Western Balkans countries join the EU more or less at the same time, saying that only such an approach would provide peace and stability in the region.

In Belgrade, Pahor met Serbian President Aleksandar Vucic as part of preparations for the Brdo-Brijuni summit on May 17 in Slovenia to mark the 10th anniversary of the initiative.

Presidents Pahor and Vucic discussed the elements of the declaration to be adopted by the leaders at Monday's summit, which relate to the faster EU enlargement of the entire Western Balkans, the Pahor cabinet said in the statement.

Pahor expressed his hope that the May 17 summit in Slovenia would end with the adoption of a declaration, which would inspire the EU to accelerate its enlargement.

Vucic, according to his cabinet statement, said at the meeting with Pahor that Slovenia's support on Serbia’s EU path is important to Belgrade as Slovenia will take the six-month EU presidency from July.

“Preserving peace and stability is of key importance to us,” Vucic said in the statement.

Before meeting Vucic in Belgrade, Pahor met Kosovo’s President Vjosa Osmani on May 13. Last week, he met with the presidents of Montenegro and Albania, Milo Djukanovic and Ilir Meta, respectively.

Pahor already met the President of North Macedonia Stevo Pendarovski in September 2020 and in March this year as well as all three members of the presidency of Bosnia & Herzegovina, Milorad Dodik, Sefik Dzaferovic and Zeljko Komsic.

Regarding the Serbia-Kosovo dialogue, Vucic underlined that Belgrade is committed to a dialogue with Pristina under the auspices of Brussels.

“We were ready for dialogue in May, we will be ready in June and always, because we believe that no frozen conflict is good,” Vucic said, adding that such conflicts could be re-activated and end with hundreds of deaths.

EU High Representative Josep Borrell said earlier this month that a new round of dialogue between Belgrade and Pristina will take place before the end of June, as Kosovo's new government needs more time to get acquainted with the situation from the previous rounds of talks.

Serbia and Kosovo are engaged in an EU-mediated dialogue aimed at normalisation of their relations. Kosovo declared independence from Serbia in 2008, but it is still not recognised by Belgrade as a separate country.

Kosovo’s PM Albin Kurti was supposed to meet Vucic in May in Brussels, but Kurti rejected the meeting saying that the new government needs more time.