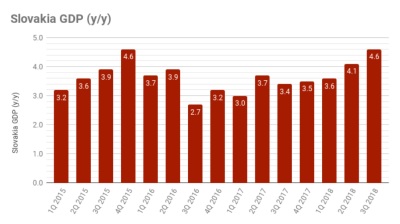 The Slovak economy expanded at its fastest rate since the end of 2015 in the third quarter of this year, up by 1.6 percentage points to 4.6%, driven up mostly by non-domestic demand, Slovak Statistics Office shows on December 7.

In 3Q18, positive economic development was affected mostly by non-domestic demand with a 5.6% increase.

The added value amounted to €21,520mn of the generated GDP, with a 4.5% y/y increase. It rose in all sectors, including financial and insurance activities by 16%, construction by 9.5%, agriculture by 8.5%, information and communication by 6.4%, industry and real estate activities equally by 4.2%, wholesale and retail trade, repair of motor vehicles and motorcycles, transportation, accommodation and food service by 2.4%. Increasing trend was also seen in collection of net taxes on products by 5.8%.

Ratings agencies serve warnings to Turkey in lira battle, officials told to stop “muddling through”
Rosstat reported that CPI grew 0.4% m/m in July, bringing the annualized inflation rate to 3.4% y/y.
BEYOND THE BOSPORUS: The lira hits the canvas