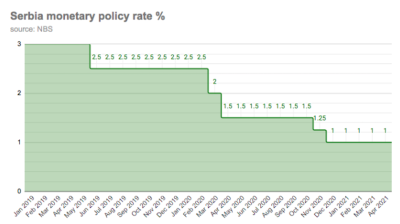 The National Bank of Serbia (NBS) said on June 10 that it will keep its key policy rate at the level of 1%.

The NBS said its monetary policy priority will be to ensure price and financial stability, while supporting faster growth of the Serbian economy, employment and exports, as well as promoting a favourable investment environment.

“In keeping the rate on hold, the executive board had in mind that the movements in the international environment still largely hinge on the course of the pandemic,” said the NBS.

“While global growth prospects are better than anticipated, the recovery will be uneven across countries and largely dependent on the vaccine rollout and economic policy support.”

The bank noted that the European Central Bank (ECB) has not yet softened its stimulus measures, while the US FED has also not raised interest rates.

Uncertainty persists in the global commodity markets, notably those for oil, primary agricultural products and food, but no major further growth in their prices is expected, said NBS in the statement published on its website.

As assessed by the NBS board, the effects of past monetary and fiscal measures can also be expected going forward, helping maintain the favourable financing conditions for businesses and households, and propping up their disposable income.

An impetus will also come from the third stimulus package this year, worth around 4.3% of GDP, said the NBS in the statement published on its website.

The executive board pointed to the strong GDP growth since the beginning of the year which outperformed expectations, but also preliminary estimates – according to statistics office data, it came at 1.7% year-on-year in Q1, which is more than the preliminary estimate of 1.2%.

On the production side, robust growth was powered primarily by construction and industry, and on the expenditure side, by fixed investments and net exports.

The remarkably high y/y growth rates posted by industrial production (33.9%), commodity exports and imports (73.2% and 63.6%, respectively) and service sector indicators in April are partly attributable to the low base from April 2020, when the economic effects of the pandemic were at their highest in Serbia and worldwide, but also to the continuation of positive trends since the start of the year, as these indicators recorded month-on-month increases as well.

Serbia’s accelerated recovery will be also underpinned by the progress in the vaccination process which is enabling many activities in the services sector to resume. “There is no doubt that external demand will recover, driving up our exports that will continue to be diversified by geography and product,” added the NBS.

“All of this, along with the planned increase in government capital expenditure for infrastructure projects, will drive GDP growth in 2021 as a whole to 6%, or possibly higher.”

This is in line with the forecast recently voiced by Prime Minister Ana Brnabic, though the World Bank’s latest projection is somewhat more modest at 5%.

Commenting on inflation, the NBS said the absence of the seasonal growth in vegetable prices early in the year was compensated for in April. Coupled with the low base effect for petroleum product prices, this pushed inflation in April to 2.8% y/y. The executive board expects a somewhat higher inflation rate in May.

However, this inflation rise is temporary and reflects primarily the low 2020 base, above all for petroleum products, which is also the case in most other countries due to last year’s pandemic-related collapse of global oil prices, the NBS said.

Low core inflation of 1.8% signals the absence of any major demand-side inflationary pressures and the central bank’s executive board expects that its stable movement around the current level will persist in the period ahead. Keeping the exchange rate stable “remains an important factor of low and stable inflation, as do the anchored inflation expectations of the financial and corporate sectors, which confirm monetary policy credibility,” said the report.

Russia's GDP catches up with pre-COVID level
3 days ago
Heatwave pushes up spot electricity prices in Southeast Europe
3 days ago
Annual growth of Slovenia’s retail sales slowed to 12.8% y/y in June
5 days ago
73.8% of Montenegrins want their country to join the EU
5 days ago
Russian banks maintain recovery, double profit in 1H21
5 days ago