Russian unemployment falls to 5.2%, almost back to pre-coronacrisis levels 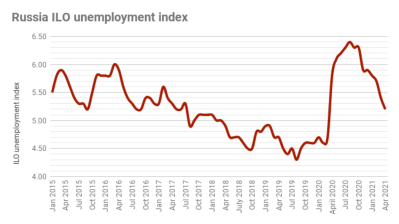 Russian unemployment has fallen to 5.2% and should be back to pre-coronacrisis levels in the next two months.
By bne IntelliNews May 30, 2021

Russia’s unemployment rate fell to 5.2%, its sixth consecutive month of decrease since the out of work rate spiked to 6.4% in August last year, according to the latest RosStat figures.

At the currently rate unemployment should fall to pre-coronacrisis levels of below 5% in the next two months.

One million new jobs have been created in March, presidential aide Maxim Oreshkin said during the “New Knowledge” forum in Russia, and the labour market has returned to pre-coronavirus (COVID-19) levels in 17 out of 85 Russian regions, Prime Minister Mikhail Mishustin said on May 12.

"It is extremely important to restore the labour market today," he said, adding that the government together with regions have developed respective sets of policies for each constituent entity of the Russian Federation.

Unemployment fell to post-Soviet lows and close to the residual minimum unemployment levels in 2019, touching on a modern all-time low of 4.3% in August 2019.

But following the oil price shock in March 2020 that led to a deep devaluation of the ruble, closely followed by the start of the coronavirus (COVID-19) pandemic, unemployment soared as companies cut costs, jumping to 5.8% in April and then rising slowly over the next five months.

Once the lockdown came off in the autumn unemployment started to fall again and that gathered pace from November after the vaccines made their appearance.

The Russian economy passed bottom in February after contracting in the first two months of this year, and grew by 0.5% in March.

Likewise the seasonally adjusted IHS Markit Russia Services Business Activity PMI index slowed a little in April to 55.2, down slightly from 55.8 in March, but remains robustly above the 50 no-change level as services bounce back. Markit’s panellists also report they are starting to hire again as demand bounces back. Services was one of the sectors of the Russian economy hardest hit by the lockdown.

Russia's seasonally adjusted GDP started to contract in the second half of 2019, i.e. before the corona pandemic. In the fourth quarter of 2020, GDP was 4.2% lower than in the second quarter of 2019. This says that the Russian economy is suffering from problems other than the coronavirus, according to Bank of Finland Institute for Economies in Transition (BOFIT).

The mood amongst businesspeople has already become very buoyant, as the Russian business confidence survey run by RosStat every month has turned positive for the first time in eight years, and for the second time ever. The index was at zero in April, after it was knocked off its feet by last year’s coronacrisis. However, it fell to a low of -7.3 in November, which is less than the -8 of the previous two years, its fall offset to an extent by the appearance of the first vaccines to counter the coronavirus (COVID-19) pandemic. The only other time the index has been positive was for eight months during the height of the noughties boom in 2006 and 2007, before the 2008 crisis knocked the index back to its all-time low of -20.