At least 64 people died in a blaze that swept through a Siberian shopping mall on March 25
By bne IntelliNews March 27, 2018

Russian President Vladimir Putin flew to western Siberia early on March 27 to meet with the relatives who lost family members in the blaze that swept through the Winter Cherry (Zimnyaya Vishnya) shopping mall in the regional city of Kemerovo over the weekend.

Russia is in shock as details emerge of the fire that has killed 64 people, according to the latest official report, including 41 children, making this the worst tragedy of its type in Russia’s history. Twenty people were rescued from the blaze and about 100 were evacuated. 15 people remain in hospital, but are reportedly in a stable condition.

The government’s Investigative Committee has been tasked with finding out the cause of the tragedy, and one of the owners of the mall has been arrested on criminal negligence charges. A security guard that turned off the fire alarms has also been taken into custody.

In a brief statement the Investigative Committee said that at this point the possibility of the fire being caused by an electronic short circuit is the “priority version,” but the work is still ongoing.

"Either this is spontaneous combustion due to poor electrical equipment, which was closed, or a version that we believe in least, that the fire was cause by an open flame," Alexander Bastrykin, chairman of the Investigative Committee, wrote on the Kremlin website. He noted that the exact cause will be determined when the investigation is concluded.

Bastrykin also confirmed that many of the doors in the cinema that was next to the source of the fire were locked, including the fire exits. Bastrykin was scathing about the role of the mall’s staff.

"The staff fled and abandoned the victims to the mercy of parents and children. Those workers who were supposed to be responsible for security, for organising the evacuation, they all fled first. We have practically no losses from the staff of the shopping centre,” Bastrykin said.

The regional governor said the families of the victims will receive RUB1mn ($17,500) each in compensation in what is becoming standard practice for the Russian government in the aftermath of particularly big tragedies. 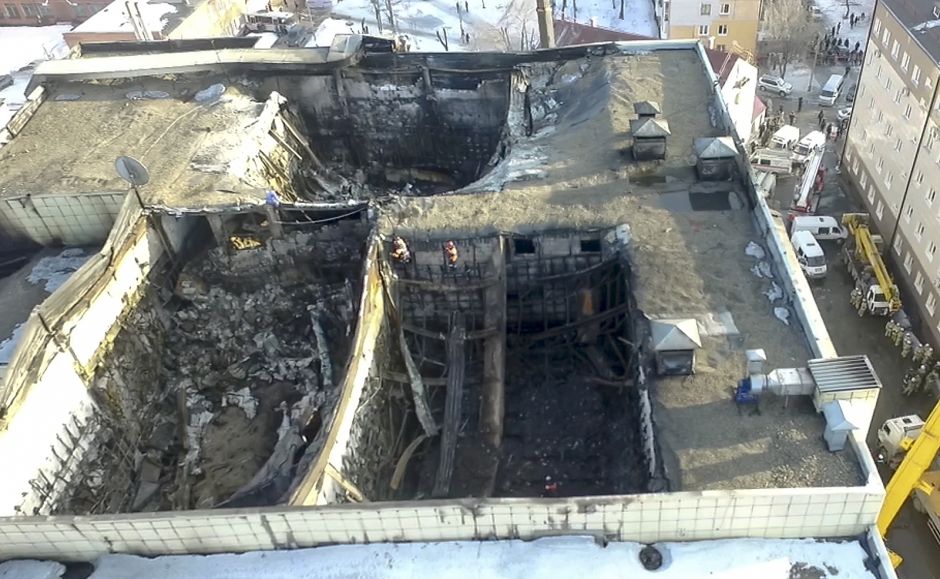 Confusion still surrounds what started the fire, though the Russian authorities have ruled out terrorism as a cause.

Russian Minister of Emergency Situation and Civil Defence Vladimir Putchkov said: "A terrorist act is off the list of causes … The investigators are probing into all the possible causes except the terrorist act," reports Tass.

However, local residents claim that up to five times more people died in the inferno than are estimated in the official figures – somewhere between 300 and 570 according to various statements. Moreover, the majority of the dead were children, according to the locals.

In addition, CCTV footage of the start of the blaze that was posted on social media seems to show a man tossing a bag into the children's play area on the fourth floor where the fire started and then hurrying away shortly before the flames appeared.

One of the owners of the mall, Denis Shtengelov, told a press conference that he believes the cause of the fire was arson.

“I have data from the employees of the [mall]. They are inclined to the version of arson in the children's room: someone set fire to foam rubber. This is the only version I heard from them. Rescue work is still ongoing, more time is needed to sort out,” Shtengelov said, adding that the shareholders in the company that owns the mall will pay RUB3mn to the families of each victim.

The Investigative Committee is putting the blame on the shoulders of the owners of the mall and has already stated that serious violations were committed both during the commissioning of the shopping centre and in its management. For example, fire exits were blocked in the building, which made it difficult to evacuate people during the fire, according to the investigators.

There was an element of stage management to Putin’s visit. The Russian press are reporting that a delegation of parents has been formed and went to the local morgue and confirmed the official body count.

"We examined the morgue and the list of 64 dead. We examined the bodies. Judging by the sizes, there are about 20 adults, the rest are children. There were no bodies hidden. We examined each cabinet, cellar, attic and garages. Some bodies are just in boxes,” Interfax quotes one of the members of the initiative group saying after the visit.

More tellingly, Putin was careful not to appear in front of a crowd of relatives that appeared in a spontaneous rally outside the regional administration building in the city centre. Instead he met with the small group at the morgue.

The Russian president has learnt his lesson in handling disasters. In 2000, shortly after Putin was elected president for the first time, the Kursk submarine sank trapping dozens of sailors underwater, all of whom died. Putin made the mistake of appearing on live TV in front of a crowd of relatives, who heckled him mercilessly, and one hysterical relative appeared to be drugged with an injection to the neck before being carried away by security officers. Since then Putin has been fast to respond to big disasters and careful to be filmed personally leading the effort to solve the problems.

The governor of the region, Aman Tuleyev, may take the blame instead. Putin was asked if Tuleyev would stay on as governor. "There was a terrible tragedy. In order to make decisions of this kind ... Firstly, you cant make a decision or announcement like that in front of cameras. It is not done against the backdrop of tragedy. And the second, you need to determine exactly who is to blame. And when we do this, and we will do it for sure, there will be appropriate solutions," Putin replied according to news wires.

Putin went on: "No one will hide anything and there will be no cover up… [The investigators] will go down the chain, beginning with those who gave the permissions, and end with those who were supposed to monitor security… We are not going to assign guilt right now. But the investigators will fulfil the full programme," the president said.

The crowd in front of the regional administration building were angry and have demanded Tuleyev’s resignation, accusing him of inaction and ignoring the danger of a fire.

"All of this is also difficult for me personally, because one of my close relatives died there as well and unfortunately this relative was a little girl," the governor said in comments earlier.

The Kemerovo region has declared three days of official mourning. 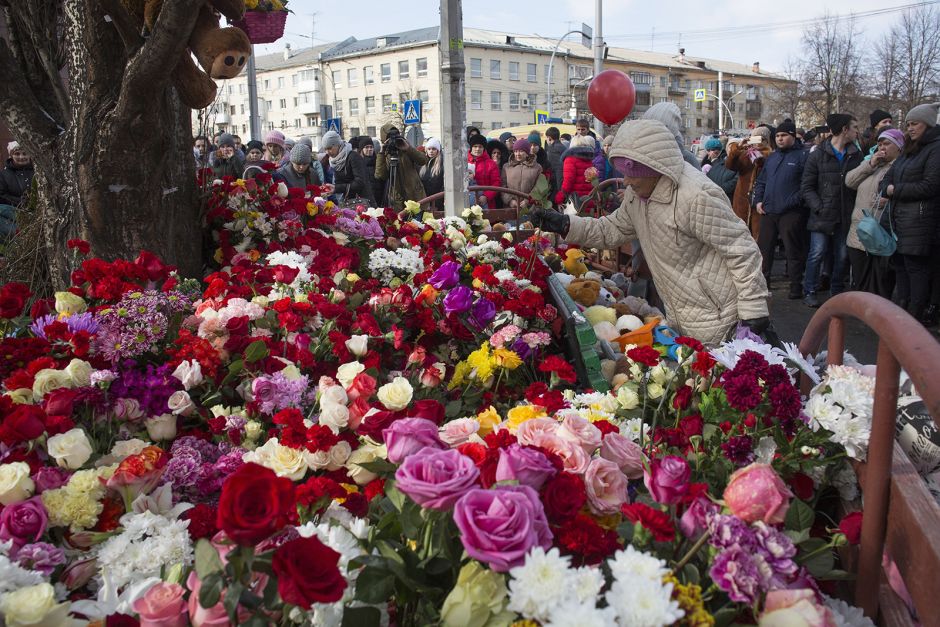