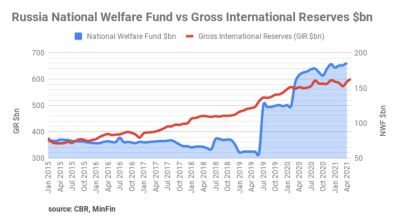 As part of the Kremlin's drive to reduce its exposure to the dollar, the Ministry of Finance said it will sell off all the dollars in the country's NWF rainy day fund in the next month. / bne IntelliNews
By bne IntelliNews June 4, 2021

Russia will entirely remove the dollar from the basket of currencies in its National Welfare Fund (NWF) as the Kremlin’s drive to de-dollarise continues to gather momentum. 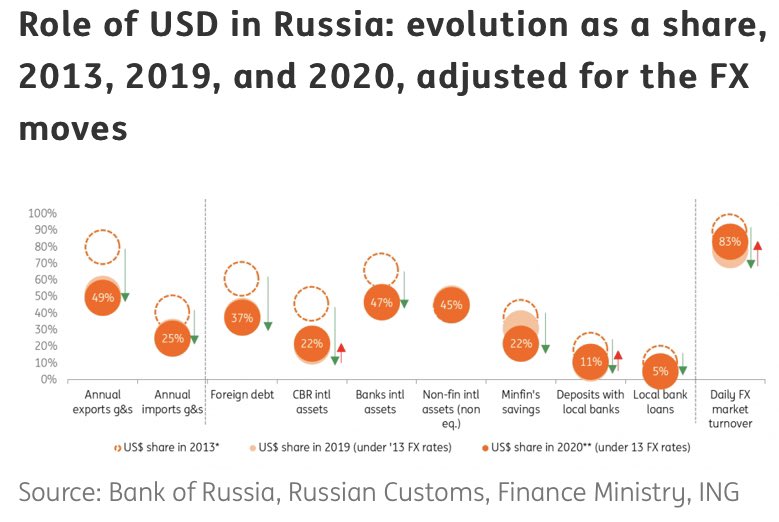 The rainy day fund was set up to support the budget in years where the government runs a budget deficit. But the fund has also become a strategic weapon in Russia’s sanctions battle with the US, as the size of the fund makes sanctions largely ineffective.

Last year the government ran a budget deficit for the first time in years, but rather than take the money from the NWF, the Ministry of Finance chose to partly fund the deficit by issuing more Russian Ministry of Finance ruble-denominated OFZ treasury bills and increase Russia’s debt slightly in order to preserve the fund.

The NWF held a total of $185.87bn as of May 1, or RUB13.825 trillion, of which 12% is monetary gold and a total of $119bn (RUB8.66 trillion) are liquid assets – about 20% of Russia’s total GIR. The difference is money in the fund that is committed to guarantee various programmes, such as VEB.RF's (formerly Vnesheconombank) large-scale infrastructure projects. Under current rules the Duma can only tap the liquid assets in the fund above 7% of GDP.

The wealth fund currently holds 35% of its liquid assets in dollars, worth about $41.5bn, with the same amount in euros and the rest spread across yuan, gold, yen and pounds, Bloomberg reports.

The change in the make-up of the fund will take place within the central bank’s huge reserves, which topped $600bn this month for the first time ever.

The change to the make-up of the NWF doesn't mean that billions of dollars will be dumped on the open market. The Ministry of Finance confirmed later the same day that it had sold the money to the Central Bank of Russia (CBR) and so the change is little more than an accounting change, with the CBR increasing the number of dollars counted as the central bank’s hard currency reserves while the MinFin reduces the share of dollars counted in the NWF.

“We do not believe that MinFin's move to ditch the dollar (apparently done in order to reduce exposure to foreign policy risks) will necessarily trigger de-dollarisation of CBR reserves (which would require external open market transaction). As of the latest available disclosure date, the CBR had $127bn in USD, or 22% of the total. First, according to international agreements, central banks are less exposed to sanction risks than governments, lowering the urgency to fully de-dollarise. Second, compared to other macro parameters, the share of dollars in the Russian central bank's international assets already appears low vs. around 60% in Russian exports, 40% in Russian imports, 60% in Russian foreign debt, 45-65% in Russian international private assets, and 60% in global international reserves,” Dolgin added. 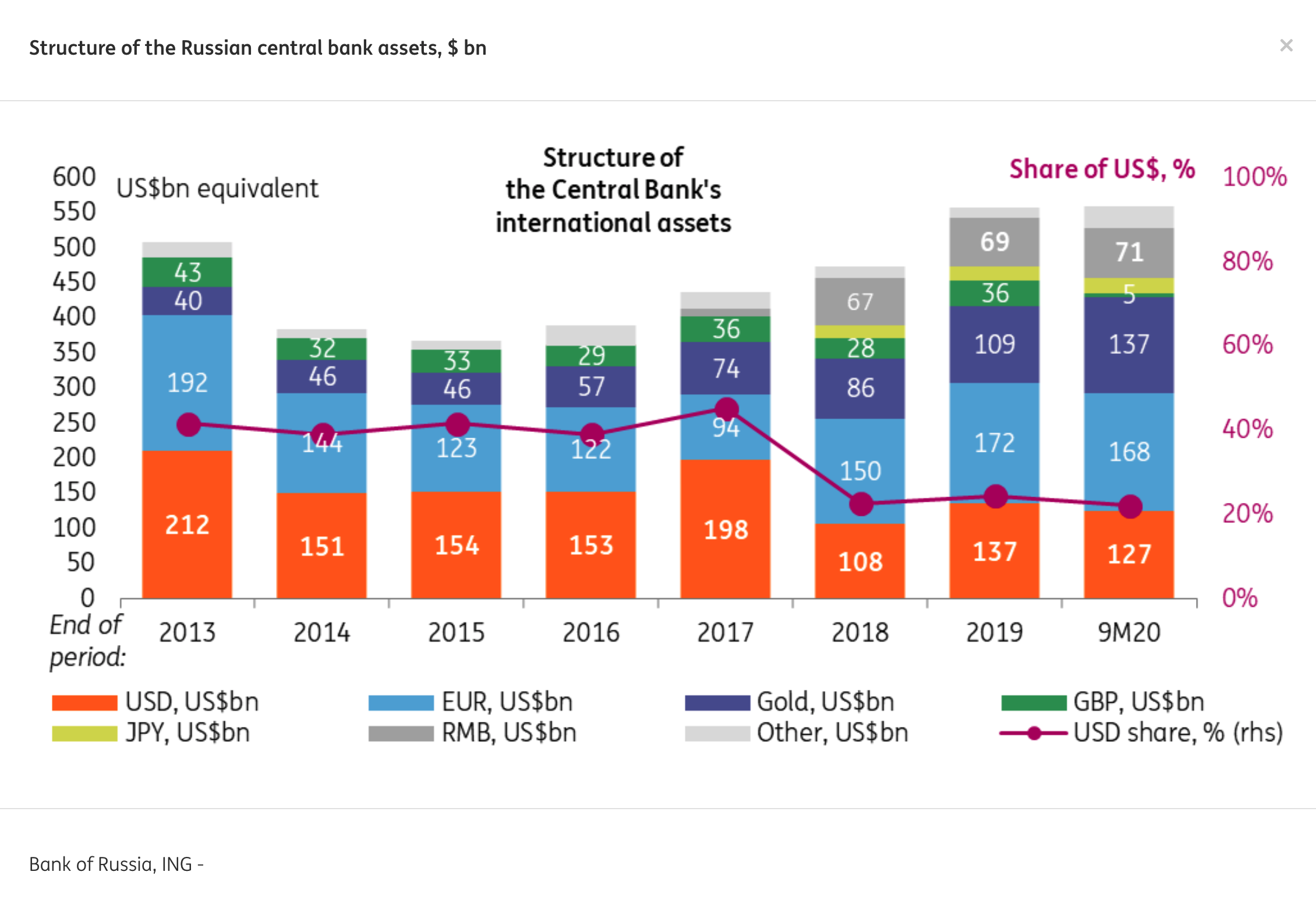 The CBR has also been running down its exposure to the dollar in its wider gross international reserves (GIR) and sold off over $100bn worth of US T-bills last year. At the same time, Russia has been pushing its trade partners to settle trade deals in national currencies rather than dollars, which is the usual currency of choice to settle payments in international trade.

The central bank reports the currency distribution of its reserves with a six-month lag, refusing to provide information on its current holdings.

When it was set up the NWF held only dollars, euros and pounds sterling, but more recently yuan, Chinese government bonds and gold were added to the mix last April. Then in February this year the Japanese yen was also added to the basket. At the time of the last report of the composition of the fund yen was 5% and the yuan was 15%. The share of dollar and euro assets in the NWF was reduced from 45 to 35% to make room for the new currencies, but the level of investments in sterling was left unchanged.

In 2018, President Vladimir Putin supported a plan to de-dollarise the Russian economy, developed by the government in response to tougher US sanctions (in particular, the blocking of assets of Oleg Deripaska's Rusal and Viktor Vekselberg's Renova). 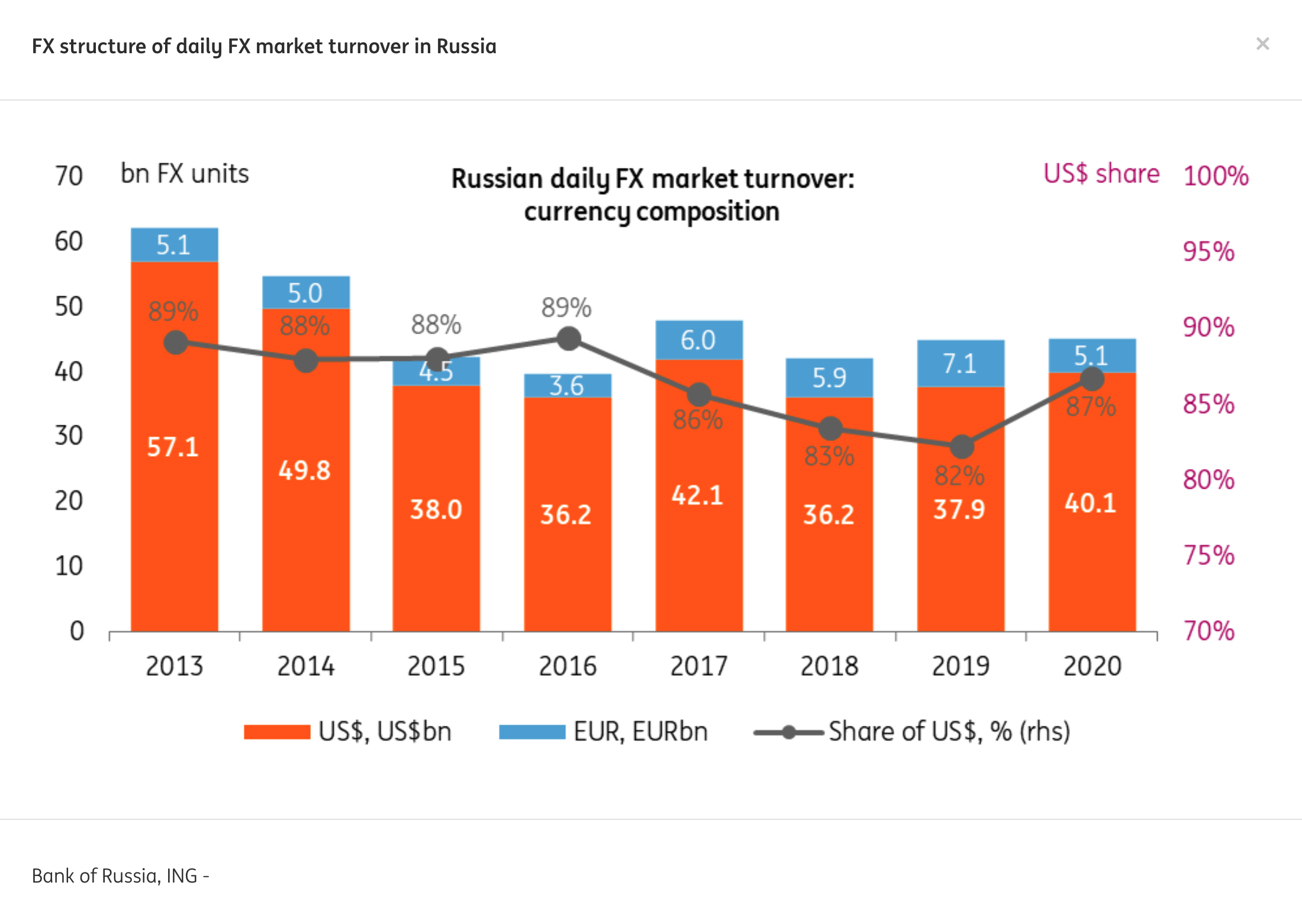