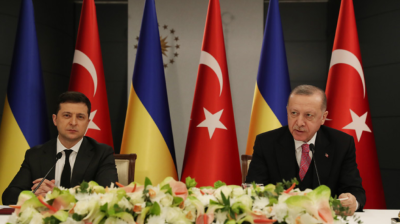 Russia has announced that it is to restrict flights to and from Turkey from April 15 to June 1, citing climbing COVID-19 cases in the country. Although Turkey’s coronavirus outbreak—which threatens to spiral entirely out of control—will be seen by many experts as an excellent reason to prevent Russians from taking Turkish holidays, the suspicion will be that the restriction, announced on April 12 by Russian Deputy Prime Minister Tatiana Golikova, is actually a response to Turkish leader Recep Tayyip Erdogan’s weekend expression of his readiness to support Ukraine amid a flare-up of tensions in its breakaway pro-Moscow eastern regions and a stark build-up of Russian forces on the Ukrainian border.

In a sign of worsening relations between Moscow and Ankara, Russian Foreign Minister Sergei Lavrov told Turkey and other “responsible” nations not to feed what he described as “belligerent sentiment” in Ukraine.

Erdogan met visiting Ukrainian President Volodymyr Zelenskiy in Istanbul on April 10, discussed military contracts with him—Turkey supplies Ukraine with, for example, armed drones—and supported him on all issues, expressing the hope that Ukraine would one day become a fellow member of Nato.

Suffering another heavy depreciation in the Turkish lira given its economic woes, Turkey risks slipping into another balance of payment crisis and, as noted by Timothy Ash at BlueBay Asset Management: “Erdogan cannot afford to give away perhaps $2-3bn in Russian tourism money this year”.

Added Ash: “I guess [Russian leader Vladimir] Putin warned him Friday night prior to the visit of Zelenskiy. The message from Putin was clear to Erdogan; don’t back Ukraine in the current fight in Donbas, but guess Erdogan made the choice between Putin, Ukraine and Nato. He has sided with Ukraine and Nato against Putin, and is now paying the price.”

Russians make up the largest single group of foreign tourists who visit Turkey. Seven million, or 16% of the total, arrived in 2019, the year before the advent of the coronavirus, providing $4-5bn in annual tourism receipts. Even in virus-afflicted 2020, 2.1mn Russian tourists still visited Turkey, often taking charter flights.

Head of Russia’s Federal Service for Surveillance on Consumer Rights Protection and Human Wellbeing (Rospotrebnadzor) Anna Popova lately said that after Russia opened its borders amid an easing of the pandemic, 25,000 of the 3mn Russians who went abroad tested positive for coronavirus. Of the 25,000, 80% had returned from a holiday in Turkey.

The seven-day rolling average of new coronavirus cases in Turkey stands at just below 52,000; it was around 9,300 on March 1 when the government decided to relax pandemic restrictions.

Teneo Intelligence put out a note on Turkey’s tourism difficulties exacerbated by the resurgent coronavirus, saying: “Apart from its detrimental impacts on the country’s healthcare system and people’s lives, the continued spread of the virus could hurt Turkey’s tourism sector which is banking on a strong season to make up some of the losses of 2020, when revenue fell by around 70% [or around $22bn] compared to 2019.

“The US Centre for Disease Control and Prevention has recently placed Turkey on a Level 4 alert over COVID-19, meaning that travellers should avoid all travel to the country. Turkey also remains on the EU’s red list and it is not clear when flights to Turkey from the UK will resume.”

Another calculation Erdogan would have had in mind when deciding whether to back Ukraine in its latest showdown with Russia is what Ankara might gain as a reward from the Biden administration for standing by Kyiv’s side.

Turkey was angered last year when it emerged during Joe Biden’s campaign to become US president that Biden had described Erdogan to the New York Times as an “autocrat”, while urging encouragement for opposition parties setting out to dislodge him. Since Biden became president in late January, he has not placed a call to Erdogan and there has been little progress in solving the disagreements plaguing the US-Turkey relationship.

Washington and Ankara remain at loggerheads over the latter’s acquisition of Russian S-400 advanced missile defence systems—Biden officials have refused to budge on the US response, which includes a ban on Turkey acquiring F-35 stealth fighter jets that is starting to undermine the Turks’ attempts at keeping their air force up-to-date—while the US State Department has spoken out against Erdogan’s dire human rights record.

Other questions include an upcoming New York trial of Turkish state bank Halkbank on charges of evading Iranian sanctions and the prospect of Biden perhaps opting to designate Turkey’s mass killing of Armenians during WWI as genocide.

“I assume that Erdogan is expecting the Biden administration to pay him back for his loyalty, by giving him some wiggle room on the Halkbank issue and the looming decision over the designation of the alleged Armenian genocide. He hopes that through this action Biden will finally place a call to him,” Ash wrote.

US Vice President Kamala Harris comes from California, where there is a large Armenian-American community, and she was a co-sponsor of a Senate resolution to recognise the killings as genocide in 2019.

In further comments on Turkey’s worsening pandemic difficulties, Teneo said: “The government blames virus variants for the surge in infections, saying some 85% of total cases across the country are from the variant first identified in the UK. However, criticism from health professionals is mounting and the public is becoming increasingly frustrated.

“Turkish citizens are also becoming increasingly indifferent to the endless attempts by the government to divert public attention from the raging pandemic and the worsening economic situation. Given the negative trajectory of the pandemic, President Tayyip Erdogan will soon have to announce a tightening of the existing restrictions, a move that will further infuriate the Turks and cause additional economic distress.”

Ukraine has been clear that it needs more weapons from the West. So, what’s the holdup?
White House doubles number of long-range rocket launchers sent to Ukraine in fresh aid package
bneGREEN: Reducing investment in fossil fuels can fund Europe’s energy transition