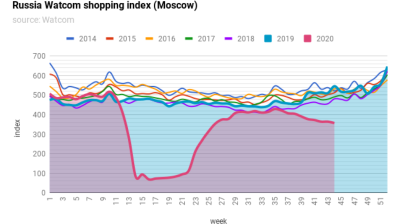 Russia’s Watcom shopping index continued to slide in the last weeks of October and first week of November after almost recovering over the summer as the second wave of the coronavirus (COVID-19) pandemic in Russia gathers pace.

Russia’s infection rate jumped to just under 20,000 per day – almost twice the peak level in the spring – but the Kremlin has said it will not impose a fresh lockdown, due to concerns over the economic damage that will do.

However, the state has imposed a “lockdown-lite” regime in an effort to curb the rise of infections. Citizens over the age of 65 have been told to stay at home and mandatory mask and glove rules in public places are being stringently enforced, with heavy fines imposed on those that ignore them. At the same time, bars and restaurants have not been closed and bne IntelliNews reporters in Moscow say that life is going pretty much as normal.

Nevertheless, people are being more cautious and going out less. The Watcom shopping index, which measures foot traffic at Moscow’s biggest malls in real time using 3D imaging technology, recovered almost all the ground lost to the lockdown in the spring by the end of the summer but started to fall again noticeably in September.

It remains to be seen if the authorities will impose a new lockdown. While the resource-rich Moscow is fairing relatively well in 22 of the 85 regions, hospitals are already running at 90%-95% capacity and all the hospitals report substantial waiting times for admission, with the worst affected regions running a one-in, one-out policy of admissions.

Albania’s exports fell by 9.0% in 2020, with the biggest negative contribution coming from the textiles and footwear sector.