Russia’s GDP shrinks by 20% in April, but government maintains a triple surplus 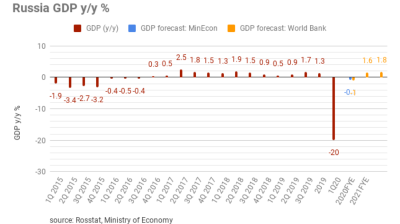 According to preliminary data from Russia's Ministry of Finance, the economy contracted by c20% in the first quarter of 2020. Analysts say 2Q20 could be the same or worse / wiki
By bne IntelliNews May 20, 2020

Russia’s economy shrank by a fifth in size in real terms in April, according to preliminary data released by the Ministry of Finance, but at the same time the government has managed to maintain a triple surplus in its external account.

Russia's nominal GDP shrank by 28%, of which two-thirds was due to the nation-wide lockdown that began on March 30 and another third was due to the collapse in oil prices, the Ministry of Finance said, reports RBC.

The real contraction of the economy in April could be 20%, according to the Ministry, once currency effects are calculated out. If confirmed the fall would be worse than the 7.5% GDP contraction Russia suffered in the 2008 crisis. However, the contraction for the full year this year will be less, as the economy is widely expected to claw back some of its losses in the second half of the year.

At the same time, the government has reported encouraging external account results. Russia is still running a triple surplus: the trade balance, currency account and federal government are all reporting surpluses of $3.8bn, $1.8bn and 0.2% of GDP respectively.

The better than expected result was partly due to a concurrent collapse in imports that offset to some extent the fall in revenue from oil and commodity exports.

The narrow budget surplus highlights the Kremlin’s extreme caution to preserve its financial firepower in this crisis. While other countries have committed anything between 5% and 20% of GDP to stimulus packages, the Russian package currently amounts to 1.9% of GDP, although that is anticipated to rise as work begins.