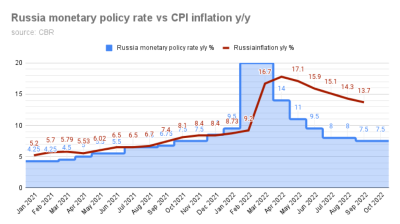 The CBR kept rates on hold at 7.5% at its October meeting, as the regulator struggles to rein in inflation but at the same time wants to promote growth. / bne IntelliNews
By bne IntelliNews October 28, 2022

The board of the Central Bank of Russia (CBR) has resolved to maintain the key interest rate flat at 7.5% at the policy meeting of October 28, making no key rate cut for the first time in six months, as expected by the market.

The 7.5% rate will remain in place at least until December 16, the date of the last scheduled policy meeting of the year, unless the CBR makes an unscheduled emergency rate move (it did so on three occasions in 2022).

To remind, the CBR had previously lowered the rate six times in a row since mid-March from an initial emergency rate of 20%. The CBR more than doubled the interest rate to 20% on February 28, a few days after Russian forces crossed the border into Ukraine, to contain the inevitable shock to the currency and to contain soaring inflation. The fast action seems to have worked, as inflation had begun to fall from its peak of 17.8% in April to 13.7% in September (chart).

In September, the CBR resolved to cut the key interest rate by 50 basis points (bp) to the pre-invasion 7.5%, making a sixth consecutive cut, but slowing the pace of rate cutting and guiding for an end of the monetary easing cycle.

The analysts expected the CBR to remain cautious in October in the face of many instability factors: “partial” military mobilisation, sharp escalation of the war in Ukraine, introduction of martial law and tapping into the National Welfare Fund (NWF) to finance the budget deficit.

Indeed, the CBR believes that pro-inflationary effects could be more pronounced than forecasted due to partial mobilisation and resulting workforce effects, as well as high inflation expectations.

“Household and business inflation expectations are at an elevated level and have risen slightly compared to the summer months," the CBR said in a press release. The propensity of Russians to save against the background of "increased general uncertainty" is seen as a counterbalancing disinflationary factor.

However, the regulator continues to see the current rate of increase in consumer prices as “generally low”, contributing to a further slowdown in annual inflation.

The CBR is also concerned about the downside risks for Russia’s GDP growth. "Further strengthening of external trade and financial constraints and the fragmentation of the global economy and financial system could lead to a larger-than-expected reduction in the potential of the Russian economy in the baseline scenario," the press release said.

“The CBR’s decision today to leave the interest rate unchanged came as no surprise and fully matched consensus expectations. This decision can be explained by the escalated geopolitical tensions, increased pressure on the financial system, and unclear consequences of expansionary fiscal policy,” BCS Global Markets commented.

Renaissance Capital wrote that October’s flat rate move “was the most predictable decision and communication in six months”, as the regulator gave pause to the market and to itself to assess developments in light of all the recent geopolitical and economic changes.

“In the short term, the regulator’s rate decisions seems to remain data-driven, which implies that the CBR [will] remain cautious in monetary easing and its choice will be in a range of [a] 0-25bp cut at the next meeting,” the analysts at BCS GM believe, adding that “as we don’t expect that inflationary expectation as well as financial volatility to decline in [the] short term, a ‘no change decision’ seems a more likely scenario at the next CBR meeting”.

At the same time, BCS GM believes that the CBR remains driven by the “need to support Russia’s economic transformation”, which could mean that the regulator is far from the end of the rate cutting cycle in the medium term.

Renaissance Capital maintains the forecast for a key rate pause until at least April 2023, when “a sharp decline in annual inflation and a persistent recessionary pattern might allow a second wave of monetary policy easing to begin”.

The analysts surveyed by Vedomosti and RBC business daily do not expect the key interest rate to change dramatically in 2022, with only a minor 25bp reduction seen possible in December in case inflationary risks do not materialise and overall uncertainty stabilises.