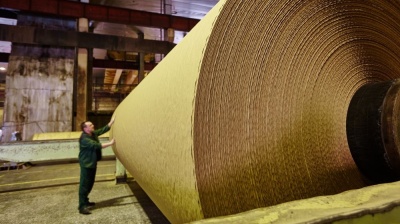 Segezha earnings were up by over a third in 2020, despite the global economic slowdown, and the company is said to be mulling an IPO in the foreseeable future. / wiki
By Ben Aris in Berlin January 15, 2021

With the attention slowly returning to the climate crisis Russia’s wood processing and timber business is coming back in focus.

Russia is best known for its oil, gas and mineral deposits, but it has another natural resource that is rarely mentioned: its forests that stretch half way around the world.

Segezha is one of Russia’s biggest paper and pulp producer and business is going well. The company's net income was negative in the first nine months of 2020, but revenues were up 15% in in the same period and 38% in the third quarter, despite the global economic slowdown. The company's main shareholder Sistema has said previously it may be lining up Segezha for an IPO in the foreseeable future.

As bne IntelliNews reported in “the Cost of Carbon in Russia”, it ratified the Paris Climate Accord in September 2019, but the key detail – just how much Russia will reduce CO2 – remains a matter of debate.

The Paris Accords suggest that countries cut CO2 emissions by 30% from the levels of 2005. In Russia's case it was emitting 1,734mn tonnes per year of CO2 emissions (mtpy CO2) in 2005; however, the Kremlin has set 1990 as the base when it was emitting 2,397 mtpy CO2 – a much higher bar and way above what Russia is emitting today.

The low bar is made even easier to clear thanks to the vast expanse of its forests. Russia accounts for 70% of the world’s boreal forests and 25% of the world's entire forest resources. The forests absorb approximately 635 mtpy CO2, dramatically reducing the country’s CO2 emissions, despite the fact that the country is also home to some of the dirtiest factories in the world.

The upshot is that the timber business is not just a money-maker, but increasingly is becoming a key strategic resource that needs to be well managed as part of the Kremlin’s strategy to reduce its CO2 emissions.

After the wildcat days in the 1990s when entrepreneurs simply cut down trees for the cash they could earn from exports, the wood processing and pulp business has matured into a sophisticated sector.

Segezha is one of Russia’s largest vertically integrated pulp and paper business, with a global footprint. Owned by multi-industry conglomerate Sistema, the company logs timber and produces a wide range of products across the paper, packaging and wood segment.

“Segezha benefits from a vast and high-quality natural resource base, with an annual allowable cut of 7.8mn cubic metres of timber. The company exports to some 100 countries, with exports accounting for approximately 70% of revenues. As a socially responsible company and a leader in a critically important sector for the environment, Segezha has a relentless focus on sustainability,” Segezha says, highlighting its environmental, social and governance (ESG) credentials that are becoming increasingly important to Russian companies.

The company has four main product types that include lumber and birch plywood, but the most important is various types of paper sacks and industrial use paper.

Segezha is the largest producer in Russia of paper sacks, sack paper and sawn timber, and also ranks as Europe’s second-largest paper sack producer, as well as the third-largest sack paper producer in the world.

Most of Segezha Group’s timber resources are found in the European part of Russia (Karelia, Kostroma, Arkhangelsk and Vologda) close to the bulk of the population and Russia’s main export markets, as well as in the Kirov region in central Russia and in the Krasnoyarsk region of Siberia.

The company’s flagship pulp and paper mill, as well as other facilities that produce packaging and sawn timber, are located at Segezha in Karelia.

In addition, Segezha operates manufacturing facilities in six European countries as well as in Turkey.

As with Russia’s other raw material production, wood, paper and pulp is predominately an export-led business, with Segezha earning 70% of its income from exports to a diversified set of markets. In 2020 the breakdown was 32% Europe, 27% Russia, 23% Asia, 10% Middle East and North Africa and the remaining 8% went to the rest of the world.

And the business has been developing well in the last few years, despite the setback in 2020 caused by the coronavirus (COVID-19) pandemic, which caused demand to fall.

Despite the global economic slump Segezha still saw its revenue grow by 38% and operating income before depreciation and amortization (OIBDA) by 106.9% year on year in the first three quarters of 2020 respectively. The OIBDA margin was 26.7%, which is among the strongest results in the industry globally, according to a company spokesperson.

And the crisis has not been all bad news. One of the effects of the oil price shock that hit international markets in March has been a steep devaluation of the ruble. However, as Segezha’s costs are in rubles, but export revenues are in dollars and euros, the company has enjoyed a lift in profits due to the FX effects.

“Due to the devaluation, Segezha has benefited from the disparity between ruble costs and foreign currency revenues (ca. 100% of the company’s costs are denominated in rubles, and 70% of revenue in hard currency),” the company said in a press release.

While Segezha’s international competition was forced to cut production due to the fall in demand, Segezha kept its plants working at full speed throughout the crisis, allowing it to maintain its profitability.

The downside of the devaluation is that the cost of imported equipment and repairs has gone up.

The outlook for the wood, paper and pulp industry is bright, as demand for pulp is expected to continue to increase by 1mn tpy in the medium term, Mikhail Shamolin, CEO of Segezha Group, told Kommersant in December.

“Every year there should be a plant in the world that produces this volume. The plants are mostly built in South America, but there is only hardwood pulp available there. In Canada, Finland and Sweden, where there are coniferous forests, there is literally no raw material to build new mills. Russia is a natural resource platform for the construction of pulp and paper mills to meet this demand. The risks of such construction in Russia are lower than in other countries with coniferous raw materials, but infrastructure is required to support the process,” Shamolin said as cited by Kommersant.

The company’s biggest ongoing investment project is Segezha West, a new 850,000 tonne market pulp production facility being constructed in Karelia. Modernisation of the existing Segezha Pulp & Paper Mill for sack paper production is also taking place. In 2020 Segezha began construction of a new plywood mill in Galich in the Kostroma region, with commissioning expected in 2021. Finally, modernisation of the pulp and paper mill in Sokol to produce sack paper and greaseproof paper has just been completed, which is expected to deliver a 60,000 tonne capacity increase.

Segezha has also benefited from the increasingly modern construction techniques employed in Russia. In October a new cross-laminated timber (CLT) plant went online in Sokol – the first large-scale production of these panels in Russia.

CLT can be used in construction to replace concrete and is strong, cheap and better for the environment, helping to reduce Russia’s CO2 emissions.

The company has not publically announced plans for an IPO but Sistema has floated many of its other holdings over the years, most recently the $1.2bn IPO of e-commerce firm Ozon in New York last year.

When Sistema CEO Vladimir Chirakhov rang the bell to start the trading of Ozon’s shares in the parallel listing on the Moscow Exchange in November 2020, a reporter asked him which Sistema company was next up for a listing. Chirakhov said it was likely to be Segezha Group, but didn't say anything definite.