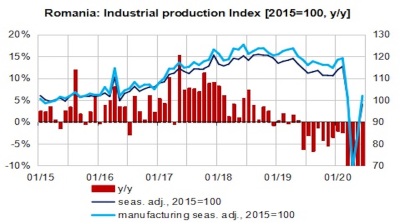 Romania’s industrial output in June was 11.3% lower compared to that in the same month last year, after a nearly 40% decline seen in April and 30% in May.

In seasonally adjusted terms, Romania’s industry went up by some 16% in June compared to May, after a similar advance in May versus April.

Compared to February, the industrial activity was still some 15% lower, though (adjusted for seasonality).

On average, the industrial output in Q2 contracted by 27% y/y, according to data from the statistics office (INS).

Notably, Romania’s industry was already on a negative trend even before the coronavirus outbreak: industrial growth has remained in negative territory since the second quarter of 2019, with the annual performance deteriorating to -6% y/y in Q1.

The worst-hit industries in Q2 were the automobile industry (-55% y/y), followed by light industry (-30%). Fuel processing contracted by one quarter — less than expected considering the subdued demand.

In contrast, the production of pharmaceuticals expanded by 3%.

The second best-performing industry was tobacco processing, which saw a small 2% contraction.

The food industry failed to capitalise on scarcer imports and buyers’ preference for local goods and contracted by 9% in the quarter to recover toward a modest 1.7% annual growth in June.

When it comes to the industries that recovered in June, the chemical industry and pharma industry stand out with annual growth rates of 24% and 34%, respectively. Wood processing also recorded a positive growth rate (+4%).