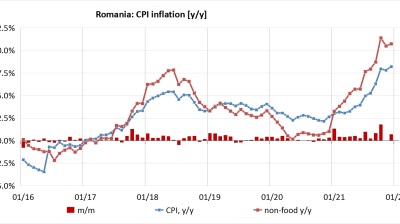 Romania’s consumer prices continued to increase in December when the inflation reached new records, after prices remained constant in November, partly thanks to a subsidy scheme enforced by the government to moderate the energy prices.

Consumer prices advanced by 0.7% in December, driven by the electricity price that increased by 3.9% and contributed nearly 0.3 percentage points (pp) alone to the monthly inflation, according to data released by the statistics office, INS.

With an annual increase of less than 15% y/y (partly due to the ‘cap and subsidy’ scheme), the price of electricity contributed only 0.7pp to the overall 8.2% annual inflation.

But the rise of prices has been more general: food prices rose by 6.7% y/y, for instance.

At its January monetary board meeting, the National Bank of Romania (BNR) also admitted that the CORE inflation rose more than anticipated. “The annual adjusted CORE2 inflation rate rose somewhat faster than anticipated, up from 3.6% in September to 4.0% in October and 4.3% in November,” a statement from the BNR said.

The central bank said on January 10 that it expects inflation to be even higher in the short term, compared to its November forecast, amid a stronger rise in electricity and gas prices, but also a rise in the price of processed food.

The latest forecast shows a peak of 8.6% in the spring after the state facilities for the payment of invoices expire. Banks expect more rate hikes. Erste Bank sees the refinancing rate at 3% by the middle of the year, while ING's estimate is that it will reach 3.5% towards the end of the third quarter.