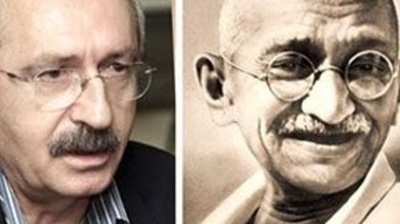 Short, bespectacled, thoroughly decent and surprisingly pacific for a man whose surname translates as ‘son of a swordsman’, Kemal Kilicdaroglu is the leader of Turkey’s main opposition party. Of course, he wouldn’t be a politician were he not susceptible to personal ambition too, and as such, he wants to run for president against anti-democratic Recep Tayyip Erdogan in next year’s election. He should not. He will lose. That’s bad news for Turkey, bad news for Nato and bad news for democracy. By now you should know, there is no good news. 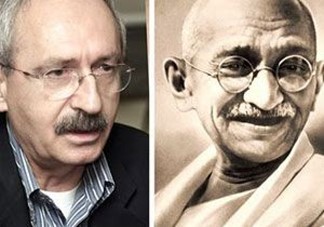 See what I mean?

Understandably, after a long career of political service and more than a decade leading the CHP (Republican People’s Party), Turkey’s Gandhi—a sobriquet bestowed owing to a physical resemblance and a penchant for a protest march—feels somewhat entitled to run against Erdogan, but he’s not the right man for this campaign. For all his qualities, he lacks charisma, youth and dynamism. (They say the same about me.) This was why he stepped aside in 2018 and nominated Muharrem Ince as the CHP candidate. He performed creditably but still lost. Debating with an idiot is not easy: passersby don’t know which is which. Kilicdaroglu polls even more poorly against Erdogan whose polarising, pugnacious style would sweep his challenger away.

Be united and it feels so good

One last act of selflessness and devotion to his nation is required of ‘Gandhi’: he must forgo the opportunity and allow another candidate, one capable of uniting the liberal opposition and beating Erdogan, to take his place. That man—and with Meral Aksener (IYI Party) ruling herself out, it will be a man—could be the mayor of Istanbul, Ekrem Imamoglu. He might win. It should be, though, Mansour Yavas, mayor of Ankara. He would win. In a direct run-off against the incumbent, the latter comes out more than 20 percentage points ahead. Yavas has box-office appeal.

It's not as bad as it looks. It’s worse

Survey the colossal ruin of the Turkish economy; its runaway inflation, floundering currency, looming balance-of-payments crunch and cost-of-living crisis that obliges even the middle class to buy tomatoes singly and melon by the slice. The casual observer is forgiven for wondering why a trained monkey would not defeat Erdogan at the ballot box. The gravity of the economic crisis can no longer be hidden, blamed on Covid or attributed to imaginary Gulenists and little unemployment pixies. 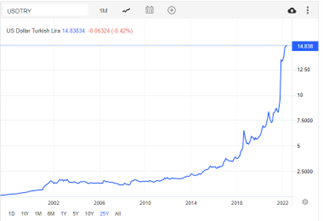 Look on my works, ye mighty and despair
(Source: tradingeconomics.com)

The problem for the opposition is that Erdogan, lifting passages whole from the Dictators’ Handbook, controls the media, sets the political weather, suppresses dissent and has mastered the art of polarising Turkish politics and dividing the opposition. Erdogan has convinced many Turks that he is battling on their behalf against many imaginary enemies, not just Gulenists but economic saboteurs and even the rapacity of exploitative supermarket chains, for instance.

The conservative, lobotomised half of the population stands united behind him. The gullible are easily mobilised. Countering them are parties representing Kemalists, Kurds and centrists and forming a fissiparous coalition called The Nation Alliance; more tolerant, and pluralist by definition. Liberals are like kittens to herd. Any whiff of a split would be fatal to its prospects. Kilicdaroglu does not possess the authority to maintain coalition discipline.

Unsurprisingly, social distress has led to the emergence of a far-right, anti-immigration, nationalist movement coalescing around a fiery populist advocating refoulement. Take a bow then, the Zafer party, muddying already turbid waters, polling in the mid-single digits at present but developing momentum and stealing votes from across the electoral spectrum. Its controversial populist leader, Umit Ozdag, is assuming the dimensions of a kingmaker as voters express their discontent with Erdogan’s ruling AKP. Turkey’s population was 85 million. It is now believed 5-10 million immigrants, mostly Syrian, have joined them. The atmosphere is at once both toxic and flammable.

Erdogan has dealt with his crisis with typical mulishness. Interest rates remain stubbornly, ludicrously more than 50% negative, the lira supported by fx market manipulation and soft capital controls, and energy imports, which comprise ~80% of Turkey’s current account deficit, are crippling growth. Avoiding the necessarily painful economic adjustments in the interests of the electoral cycle, it seems there is no suffering through which Erdogan will not put his people in pursuit of power. For him, being in office is his ‘Get Out Of Jail Free’ card.

All Erdogan can hope for is to prop up his Potemkin economy until an election is called and this informs his recent rapprochement with the Saudis. In a shotgun marriage of convenience, the Turks decided to delegate the Khashoggi murder investigation back to Riyadh. A visit followed, and one should expect financial support, or at the very least, a swap agreement in return. 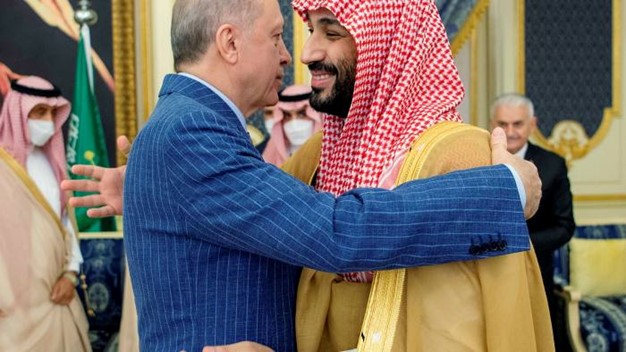 You may kiss the bride.

The identity of Erdogan’s opponent is of paramount importance not just for the Turks enduring this particular brand of Islamofascism and for the millions of refugees sheltering in Turkey but also for Nato.  Erdogan’s support of the coalition backing Ukraine has not been unqualified. Turkey shows no sign of renouncing Russian oil and gas imports and, far from cutting off Russia, Erdogan is solely concerned with the planeloads of Russian holidaymakers who keep the Antalya tourism industry afloat. Russian oligarchs and their yachts find literal and figurative safe harbour in Turkish waters.

The opposition’s leading candidates would all adopt a more pro-European/ pro-Nato stance (it could hardly be less) and the importance of this relationship for western allies cannot be overestimated. At a time when authoritarians threaten to deepen the worldwide democratic recession, the global order desperately needs a big trend reversal. Once Erdogan has been defeated, Turkey can revert to a parliamentary democracy rather than an executive presidency and perhaps then Kemal Kilicdaroglu can become the head of state he deserves to be. For now, though, the priority must be simply defeating Erdogan and by a wide enough margin to ensure the victory is indisputable. (See Trump, 2020, Jan 6th etc.)

OPINION: Belgrade’s EuroPride parade was a victory against the Kremlin

The triumph of love over hate showed most Serbian citizens want to live in the democratic world despite Moscow’s efforts.

Sanctioned Russian diamonds are reaching the US consumer, but some are getting there legally – for now
21 hours ago
EBRD: Reduced gas supplies and inflation to slow growth further in EBRD regions
1 day ago
ING: Eurozone PMI suggests the region may already be in recession
3 days ago
ING: Energy price caps are appealing, but are not without risks
7 days ago
OPINION: Belgrade’s EuroPride parade was a victory against the Kremlin
8 days ago