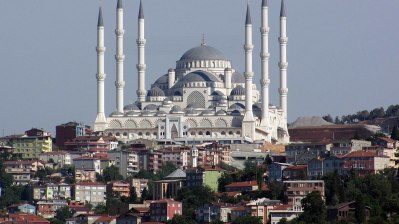 A sustainable recovery may not yet be in the air in Istanbul (pictured is Camlica Republic Mosque).
By bne IntelliNews September 11, 2019

Turkey’s lack of a disciplined monetary policy means a “renewed collapse in the lira” is only a matter of time, according to Commerzbank.

Rabobank, meanwhile, has warned that a “major policy mistake could be in the making,” according to Bloomberg.

The observations have been made ahead of September 12’s meeting of Turkey’s rate-setters.

Analysts have been taking a look at the lie of the land with the Turkish lira (TRY) showing some renewed fragility. It is the worst performer in emerging markets against the dollar since September 4. That was the day Turkish President Recep Tayyip Erdogan—who is widely viewed as blatantly undermining the monetary independence of Turkey’s central bank—remarked that rates would descend further and put forward a 5% target for Turkish economic growth in 2020 that many analysts see as overly ambitious. The TRY was on September 11 on track for its longest losing streak since May.

Most analysts surveyed by Bloomberg anticipated that the central bank’s monetary policy committee will opt for a benchmark rate reduction of 275 bp, on top of the 450 bp cut they brought in at their last meeting.

Turkey is indeed presently achieving falling inflation—the annual rate is down more than 10 pp since hitting a high last October—running in tandem with rate cuts, but observers say much of the credit for that should in fact go to the major monetary tightening that came after last summer’s lira crisis and external factors such as the recent easing delivered by the Fed (not to mention the deep scepticism over how Turkey’s official statisticians are compiling the inflation data). September 12 may see the European Central Bank go ahead with a rate cut and restart quantitative easing, moves that would assist Turkey’s rate-setters if they adopt further easing, but analysts still believe Erdogan’s policy unorthodoxy will be found out in the end.

“Worryingly, over a longer horizon, the trend toward overly loose monetary policy risks exacerbating Turkey’s age-old vulnerabilities by fueling the twin dynamics of inflation and attendant currency weakness. These dynamics can wreak havoc on a highly leveraged economy, where both the private and public sectors are heavily reliant on FX-denominated financing,” Phoenix Kalen, a strategist at Societe Generale in London, observed in a note to investors.

Kalen added: “Recent events have persuaded us that the CBRT [Central Bank of the Republic of Turkey] may attempt a relatively thin real policy rate buffer of 2-3%, as the central bank has reconciled itself to aggressive monetary policy easing in facilitating the government’s pursuit of a credit-fueled economic recovery.”

Kalen concluded that if headline inflation ended the year as the CBRT expects at 13.9% y/y, a 2-3% real policy rate range would translate into nominal policy rates of 15.9-16.9% at year-end. “That would suggest total policy rate cuts of 285-385bp between now and the year-end. If the CBRT delivers the substantial 200-275bp rate cut that the market expects this week, Turkish financial markets may be stable to slightly weaker.”

Kalen said she expected the central bank to cut its key rate by 250 bp on September 12.