ISTANBUL BLOG: Turkish assets rally ahead of near bolted-on rate cut. Is Erdoganomics no joke after all? 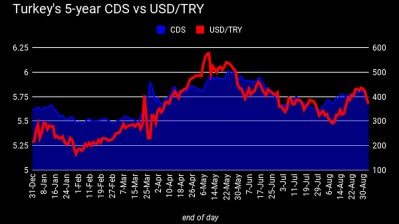 The comparative strength of the Turkish lira has been widely ascribed to very strong prospects of monetary easing at home and abroad.

However, taking one September 4 report as an example, a Reuters account of the currency movement did not explain why the upcoming rate cut was helping the Turkish lira (TRY) outdo its peers nor why the local currency was benefiting from the Fed and ECB rate cut prospects more than its peers.

Taking a look at the Borsa Istanbul’s benchmark BIST-100 index, it has now broken the 100,000 threshold, while the 10-year domestic benchmark government bond yield was below 15%.

The smaller-than-expected contraction in the economy in the second quarter reported this week could mean Turkey is emerging from a year-long downturn, Al-monitor reported on September 3 in a story entitled “Key economic data suggests Turkey turning corner”.

“Turkey's second-quarter GDP growth figure beat expectations again and a ‘W’ pattern—or re-entering recession—has been avoided… This data increases the likelihood of positive growth in 2019, given the strong positive effect from now onwards,” the news outlet quoted Alvaro Ortiz Vidal-Abarca, chief economist for Turkey at BBVA Research, as writing in an email.

Spanish lender BBVA, which owns 49.85% of Turkish private lender Garanti BBVA, said on July 31 that it made around 9% of its Q2 profits in Turkey, with the country's political instability and economic recession denting group profitability. BBVA's second-quarter net profit fell 18% y/y to €140mn.

“With our fight against inflation and our policies that prioritize healthy growth, we will achieve our year-end targets in all fields,” Al-monitor quoted Turkish President Recep Tayyip Erdogan’s son-in-law and Finance Minister Berat Albayrak as saying in a tweet.

Turkey is targeting growth of 2.3% and inflation of 5% by the end of 2019, the publication noted, adding: “While those goals still appear elusive, this week’s set of data will make it easier for the central bank to cut interest rates at its next meeting on Sept. 12.”

When speculation recently mounted that Albayrak was in danger of getting the boot, Erdogan strode into the picture accusing the then central bank governor Murat Cetinkaya of being behind Turkey’s economic collapse, but off-the-record questioning of Albayrak’s aptitude has not fallen off since then.

According to Al-monitor, Cetinkaya, was unceremoniously dumped after keeping interest rates high to protect the TRY.

If Cetinkaya was independently keeping policy rates high, observers shall have to take back claims that the central bank’s independence had, thanks to Erdogan’s interventions, become a so-called independence (however, now Erdogan seems to have put a favoured official at the national lender’s helm, and a chunky interest rate has followed, the claims have redoubled).

From somewhat the same perspective, Erdogan administration officials will tell you that Turkey did not trip itself into an economic crisis at all—it was just placed in difficulties by the buffeting of claims and accusations thrown by its enemies on both the domestic and international scenes.

Well, if that is the case, how to explain that officials now talk of the Turkish economy coming out of a trough if it was never crisis-stricken in the first place?

Let’s also swallow the government’s insistence that the rule of law still applies in Turkey. And then let’s try to work out how it is that the interior minister threatens, using the rhetoric of a street gangster, “to devastate” Mayor of Istanbul and opposition politician Ekrem Imamoglu in response to his support for three Kurdish mayors who were replaced by government appointees over alleged terror links.

Al-monitor also noted that Erdogan has taken greater control over the economy while spouting his unorthodox views on economic theory.

It’s a tremendous thought that Erdoganomics, abused for so long, has proven right after all and mainstream symposia in honour of this new branch of economic thinking can not be all that far away.

The publication spared a short paragraph to mention a Financial Times report that suggests some analysts do indeed question the figures underlying the GDP data.

“For example, the state statistics office figure showed household spending only slipped 1.1%, helping limit the second-quarter annual contraction, but other consumer data, including imports of consumption goods, would indicate that households are spending even less, they said. Other data, including rising unemployment, slower lending at banks and a current account surplus, all indicate a slowing economy. Even the slowdown in inflation suggests consumers are spending less. Yet households are still finding new and unpleasant price increases. Late last week the government hiked natural gas prices for households by 15%, bringing the total increase over the past year to 54%. One Twitter user quipped that sweaters may not be enough to keep Turks warm—but at least the fall in inflation could make them cheaper to buy,” Al-monitor wrote.

Data from the trade association IMSAD showed on September 4 that construction materials production in Turkey contracted by 20.3% y/y in H1.

According to data from the national statistical institute TUIK, the issuance of construction permits declined by 60% y/y in the first half.

Something, doesn’t add up.