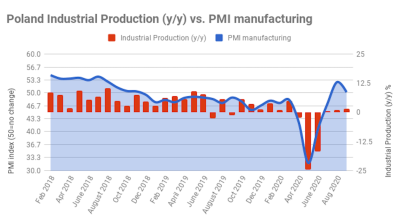 Poland’s industrial production grew an unadjusted 1.5% y/y in August, adding 0.4pp to the annual reading from July but still below consensus, which assumed an annual expansion of 2.7%, statistical office GUS said on September 18.

Data confirm the expected slowdown in the dynamic production increases seen in May-July, which resulted from the increased number of orders that filled the industrial pipeline after lockdown as well as meeting pent-up demand.

Broken down by the main segments, output grew 2% y/y in manufacturing and 6.2% y/y in water supply and waste management.

A fall of 2.7% y/y in the utility sector and production dropping 10.7% y/y in mining and quarrying held back the headline figure.

Growth is attributed to the strong recovery in the automotive sector, which saw output rise 0.6% y/y, up from -15.2% in June.

Overall, production increased in 21 out of 34 industrial segments in August in y/y terms.

Anger trumps fear of pandemic in Poland after abortion is banned
The billionaires club, where the mega-wealthy go to meet each other
Poland expected to move closer to second lockdown next week

Economic development was mainly supported by the service sector and primary production, but their recovery also slowed in September, as real disposable incomes go negative again

The board of the Central Bank of Russia (CBR) at the second last policy meeting of 2020 on October 23 resolved to keep the key interest rate unchanged at 4.25%, in line with expectations.