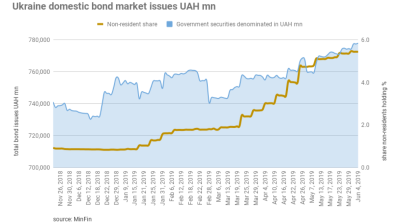 The non-residents' share of Ukraine's UAH local bonds has risen rapidly to c.5% but has taken a pause now on rising political uncertainty.
By Ben Aris in Berlin June 5, 2019

Ukrainian parliamentarians have challenged President Volodymyr Zelenskiy’s decision to dissolve parliament early in the Constitutional Court, which has increased uncertainty and unsettled investors into Ukraine’s bonds, said Raiffeisen Bank (RZB) in a note on June 5. As the chart shows, the recent rally in Ukraine's UAH denominated bonds amongst non-resident investors has slowed.

Zelenskiy ordered the dissolution of parliament during his inauguration speech, however, his authority to do so is open to question. The president has the right to dissolve parliament, but with some restrictions: he can't dissolve parliament six months before a general election; and if the ruling coalition collapses he has to give parliament one month to form a new coalition.

While Zelenskiy’s inauguration at the end of May was early enough to give him time to dissolve the Verkhovna Rada before the six month election deadline expired, the coalition rule is a problem.

On May 17 the People’s Front fraction withdrew from the ruling coalition, which in effect causes the collapse of the government.

"We declare our withdrawal from the coalition and termination of its activity as of May 17, 2019, and initiate the creation of a new coalition with a new agenda," the People's Front faction's leader Maksym Burbak said during the parliamentary session at the time.

The month’s delay in forming a new government means the six month deadline would be missed and the government would be in limbo until general elections in October.

Zelenskiy has ignored the coalition collapse and claimed that as the coalition never published its members' names nor released its manifesto when it was formed in 2014 it was never actually formed. If there is no ruling coalition for more than a month the president is entitled to dissolve parliament. Zelenskiy claims there has been no coalition for almost five years.

Bond investors don't like all this uncertainty. The International Monetary Fund (IMF) team was in Kyiv in the last week of May and was supportive, but made it clear there will be no fresh disbursements of money until after the elections, slated for July, and the formation of a new cabinet. If the election process drags on then Ukraine will struggle to finance its debt obligations as it has $5bn of debt payments coming due in the near future.

“Political tensions may increase ahead of the expected Constitutional Court’s ruling on legitimacy of a decree by President Zelenskiy ordering to disband parliament and call early elections,” said Gintaras Shlizhyus, a financial analyst with RZB in Vienna.

The Constitutional Court has defined the case as urgent, with deliberations expected on June 11 but with no final date set for the case.

The delay to the IMF money means that pressure will mount on Ukraine’s FX reserves as the $5bn of repayments come due, of which domestic debt accounts for 52% of all payments.

The National Bank of Ukraine (NBU) will have to carefully manage its meagre resources as it currently has about $20bn in reserves. The instability will also delay badly needed rate cuts, despite the falling inflation, needed to boost economic growth.

More painful will be a slowing of foreign investors into the local debt market that has taken off since Ukraine was hooked up to the Clearstream international settlements and payment system in May. Foreign investors have already invested well over a billion dollars and seen their share of outstanding bonds go from nothing two years ago to 5% now. The local bond market is set to become a major sources of capital for the government but the political fracas is already undermining confidence.