Polish PMI edges down in May 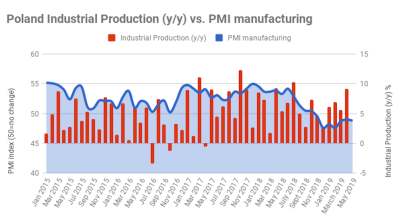 Poland’s PMI fell 0.2 points to 48.8 in May, remaining below the 50-point line separating contraction from growth in the sixth month straight, IHS Markit reported on June 3.

The indicator’s fall attests to the continuing deterioration of business conditions at Polish manufacturers, IHS Markit said in a comment. That is, however, refuted by the Polish industry’s performance early in 2019 with industrial output growth yet to fall below 5% y/y. In April alone, Poland’s industrial production shot up 9.2% y/y.

“Output, new orders and exports continued to decline, albeit at weaker rates than at the start of 2019. Subsequently, sustained declines in employment and purchasing activity were recorded,” IHS Markit said

Inventories of purchases expanded for a survey-record eighth successive month, although final goods stocks were cut as firms sold off old stock. Meanwhile, inflationary pressures were the weakest in two-and-a-half years, the index’s compiler also noted.

“Export demand clearly remains a drag on the sector, dropping for the tenth successive month and at a marked rate. Germany and other neighbouring economies were mentioned as sources of weakness," IHS Markit’s Trevor Balchin said in a comment.

"Overall the survey data are fairly neutral, signalling neither an imminent recovery in the near term nor a sharper rate of decline,” Balchin added.

The apparent weakness of the Polish industrial sector is yet to be confirmed by industrial production data for May, due later this month.

While there can be mismatches between individual readings of the PMI and the actual industrial production figures, the current consensus for the Polish economy forecasts an incremental deceleration of economic growth in Poland to at least 4% y/y in the coming quarters.

Poland’s GDP surprised to the upside by growing 4.7% y/y in the first quarter in adjusted and non-adjusted terms alike, stats office GUS said in late May.