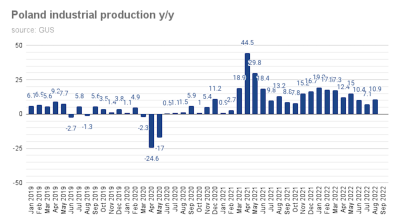 The expansion came in at 0.8pp above the consensus line and stood in contrast to the PMI survey, released at the beginning of the month, which indicated that the fallout of the war in Ukraine – skyrocketing energy prices in particular – would quickly stifle output growth.

That was not the case in August but still, analysts expect that indicators like PMI provide a credible outlook on how the Polish industry will fare in the next few months, as demand is poised to weaken in line with the overall economic slowdown.

“A good [August] reading does not change our expectations that the pace of production growth will be slowing down. The availability and price of energy remain a key risk for the sector,” bank PKO BP said in a comment.

The slowdown is likely to be a “soft landing,” rather than an abrupt crash, PKO BP added.

Seasonally adjusted, output growth came in at 11.2% y/y in August following a gain of 10.2% y/y the preceding month.

In unadjusted monthly terms, industrial production grew 0.7% after a fall of 7% m/m in May.

An upside surprise was an adjusted month-on-month expansion of 0.7%, picking up on a gain of 0.5% m/m in July, which came after three months of declines.

Broken down by the main segments and in unadjusted terms, production grew 11.1% y/y (July: revised +7% y/y) in manufacturing.

Output in the utility sector expanded 5.1% y/y in August after a revised expansion of 5% y/y the preceding month.

In water supply and waste management, there was a growth of 8.2% y/y, which followed a revised gain of 3.7% y/y in July.

Overall, production rose in 30 out of 34 industrial segments in August in y/y terms, up from 26 in June. The fastest sectorial expansion took place in mining coal and lignite and in production of cars, trailers and semi-trailers. Output contracted the most in production of wooden goods and in the furniture segment.

Industrial production data do not change much in the outlook for Poland’s monetary policy with the National Bank of Poland now walking a tightrope between measures to quell inflation and the imperative to avoid a sharp decline in economic growth and employment.