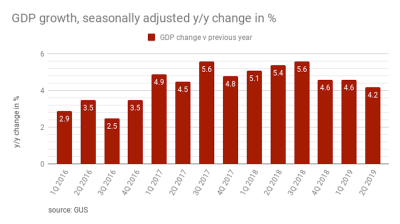 Polish GDP growth came in at to an unadjusted 4.5% y/y in the second quarter, a preliminary estimate released by the Central Statistical Office GUS on August 30 showed.

Domestic demand drove the headline result in April-June, accelerating its growth pace to 4.8% y/y versus 4.2% y/y in the first quarter. Investment growth weakened, however, to 9% y/y, compared to 12.6% y/y in January-March, data showed.

Growth in overall consumption decelerated to 4.1% y/y in the second quarter, 0.3pp below the first quarter reading. Still, household consumption expanded 4.4% y/y, marking a slowdown of 0.5pp compared to the annual expansion recorded in the previous quarter.

The headline figure is an upward revision of 0.1pp against unadjusted reading presented in the flash estimate earlier in August. But it is a slowdown versus 4.7% y/y unadjusted expansion in the first quarter.

Growth came in at 4.2% y/y in adjusted terms as well, an upward revision of 0.1pp against the flash estimate. Again, compared to the y/y adjusted reading from the first quarter, growth slowed down 0.2pp.

“The data do not change our expectations as to some improvement in the economic situation in the second half of this year, which would allow achieving economic growth of 4.6% y/y in 2019. In 2020, [we expect] a further slowdown in growth, mainly due to [a slowdown in] infrastructure investments and the smaller impact of social transfers than in 2016-2018,” Bank Millennium said.