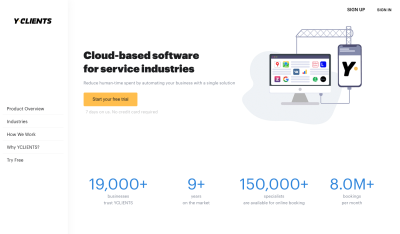 No further details about the deal were disclosed, but an industry insider told the business daily Kommersant that the company might have been valued in the range of $40mn.

The company says it processes more than 8mn appointments each month for a value of “more than 10bn rubles” (around $160mn).

The funding will be used to “further develop existing and new products, scale the business and expand into new industry segments,” Elbrus Capital announced. YClients aims to “significantly increase its customer base, expand geographical presence and strengthen its leadership among cloud-based solutions for small and medium size businesses” in Russia.

Founded in 2009 by a Russian team, Guard Capital has invested in a dozen of projects in the telecom and Internet industries. It generally invests from $2 to $5mn in each deal.

As Russia’s retail and tech sectors consolidate, the leading companies are turned their gaze outwards to hunt for new technology and innovation.

BlaBlaCar, the carpooling giant born in France, has stopped offering its services in Crimea, where it had been operating since 2014. The decision aims to avoid being targeted by the EU sanctions against firms operating on the peninsula, according to