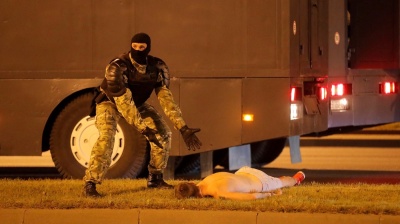 Belarusian President Alexander Lukashenko normally relies on some 10,000 security forces to enforce his control, but with 100,000s of people on the street that number is woefully inadequate now
By Ben Aris in Berlin August 13, 2020

Does Lukashenko have enough forces to oppress the entire country? The jails in Minsk are full to the brim. Pictures appeared on social media on August 12 showing detainees sitting on the floor of school gyms with their hands crossed over their heads as the jails are already overflowing. The strongman of the last 26 years can’t arrest everybody.

The brutal crackdown in Minsk continues in a cat-and-mouse game between the OMON riot police and the hundreds of thousands of ordinary people who have taken to the streets every night over the last four days to protest against Belarus President Alexander Lukashenko's blatant theft of the presidential elections on August 9.

But Lukashenko’s grip on the regions is already tenuous. The best and most loyal troops were moved up to the capital in the weeks before the elections, now leaving Lukashenko exposed in the regions.

The crackdowns in cities such as Brest and further afield – cities that former housewife and nominal victor in Belarus’ presidential election Svetlana Tikhanovskaya visited during her pre-election campaign – have also been brutal. But there are constant reports of crowds overrunning smaller cities and of OMON laying down their shields, unwilling to beat their friends and neighbours, the teachers that teach their kids, the doctors that treat their grandmothers, the shopkeepers that sell them their groceries.

It’s one of Lukashenko’s weaknesses: Belarus is a small country and in the cities and towns outside the capital everyone knows everyone else.

This revolution has become violent remarkably fast, as already brute force is all that Lukashenko has left. The EuroMaidan protests took months to become violent, but the first person was killed in Minsk on the first day of the protests. Having claimed 80% of the vote on August 9, Lukashenko’s real share of the vote was anything between 3% and 15%, according to the two dozen polling stations that defied the regime and reported the actual number of votes for the candidates.

It has been said that despite the fixing of previous elections, Lukashenko would have probably won a free and open election in previous years thanks to the social contract where he sheltered the weak, the old and the state workers from the economic ravages of the collapse of the Soviet Union. That is no longer true. He is holding on by brute force alone. Oddly, the clearest expression of Lukashenko position has come from ultra-nationalist and leader of the Liberal Democratic Party of Russia (LDPR) Vladimir Zhirnovsky, who said this week: “Lukashenko should go. Everyone hates him.”

Belarus is now facing either a popular uprising that ousts him or a North Korea scenario where the regime resorts to the extreme methods of repression to stay in power. But to carry that off Lukashenko will have to expand his already powerful police state infrastructure and he simply doesn't have the manpower.

In the run-up to the elections it was reported that he has at most 10,000 loyal civil and security force troops to call on to impose his will on the people. In the weeks before the vote, state TV showed footage of recruits being trained in anti-riot techniques, partly to intimidate voters, but partly because the security forces needed more men.

In normal circumstances the current number of officers would probably be enough to control the population of 10mn, but with hundreds of thousands of people on the streets of Minsk alone this is no longer enough. That is the main reason why the police have been so aggressive: they need to get the cat back in the bag quickly or face losing control of the situation completely.

Lukashenko has also brought the army into play, and according to bne IntelliNews sources in Minsk, he is rumoured to have recently released criminals from jail, armed them with rubber bullet guns and put them into uniform with the promise of a pardon if they served the state – reports that so far bne IntelliNews has been unable to confirm.

The president’s hold on power is clearly already shaky. There are constant reports of soldiers and police quitting the force in protest against the indiscriminate beatings of regular people. A prominent TV host quit this week, who has until now been a media stalwart of the regime. It is impossible to assess how widespread these sentiments are but if they reach a critical mass then the Lukashenko regime will collapse quickly.

More likely, even if Lukashenko manages to hang on to power, his obvious total lack of legitimacy creates a more formidable problem for him: the mounting likelihood of a palace coup.

In most of the countries of the Former Soviet Union (FSU), many of the presidents such as Russian President Vladimir Putin or former Kazakh President Nursultan Nazarbayev have fixed the votes to give themselves 70% or more despite the fact that they would probably be re-elected if the vote were free and fair.

The reason is the vote is not to seek a popular mandate, but to reassure the elites – who enriched themselves under that president, but hold on to their wealth only while that president is in power – that the president remains firmly in control. If there is any chance of him being ousted, and endangering the elite’s privileged position and riches, he will be changed for a more suitable candidate. As bne IntelliNews has written elsewhere, corruption is the system, but for this system to work it needs a docile population.

Lukashenko's obvious total illegitimacy, the fact that the capacity of the jails has already been used up, and the obvious determination of the people to see this fight through all spell big problems for Lukashenko in the coming days and weeks.

MOSCOW BLOG: The storming of the US Capitol was not a coup, but the shelling of the Russian White House was

MOSCOW BLOG: The storming of the US Capitol was not a coup, but the shelling of the Russian White House was
MOSCOW BLOG: START II is a chance to renew relations between Russia and the West
MOSCOW BLOG: What to do in the next decade? The Kremlin and the people are confused and unsure