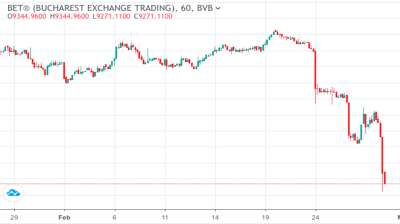 The main stock markets in Central and Southeast Europe have dropped amid a smattering of Covid-19 coronavirus cases reported across the region in the last few days.

Most of these are so far isolated outbreaks affecting just a handful of people and all are linked to travel to northern Italy, where hundreds of people have been infected in the last week. However, they are seen as just the beginning of a wider outbreak expected to develop in Central and Southeast European countries over the coming weeks, and governments are on high alert.

The first case in the region was confirmed in Croatia on February 25, but the Zagreb Stock Exchange’s CROBEX index dropped by 4.91% the previous day as fears spread across countries close to the outbreak in northern Italy of an imminent wave of infections.

Two more cases have since been reported in Croatia, and others in Estonia, North Macedonia and Romania.

Regional champion the Warsaw Stock Exchange saw its main index, WIG, plunge by 4.29% on February 27 amidst worldwide fears of a further spread of the coronavirus.

In Warsaw, a staggering 75% of listed companies saw their stocks lose value, as investors panicked over the impact of the epidemic, which, some analysts claim, could soon hit global supply chains if governments move on to implementing measures to curb travel.

Poland is yet to officially confirm any coronavirus cases. The country’s health ministry said on February 27 there were 47 people in hospitals across the country suspected of a coronavirus infection, while 55 others were put in home quarantine.

“There are no confirmed coronavirus cases in Poland at the moment,” Poland’s Health Minister Lukasz Szumowski told a press conference in Warsaw. “But it is only a matter of days when they will appear,” he added.

Earlier in the week, the Prague Stock Exchange had experienced the most significant daily slump since the Brexit referendum in June 2016. The PX Index weakened by 2.81% to 1,058.69 points, to its lowest value since the end of October 2019, due to coronavirus concerns, Patria reported on February 25. 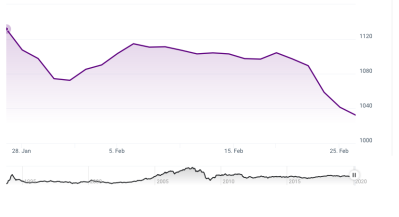 Almost all major titles weakened on the Prague Stock Exchange on February 25: Avast fell by 3.82% to CZK126 (€5), Komercni Banka, the mobile operator O2 and the insurance group VIG each by more than 3%, with the only exception being Central European Media Enterprises (CME), which saw an increase of 0.19% to CZK104.

“The phantom of coronavirus, which has spread to 30 countries, is bypassing the markets,” commented Patria Online analyst Jana Knechtlova, adding that shares in the tourism and luxury sectors have declined the most, followed by the shares of automobile and mining companies.

“While the depreciation of the Polish zloty or Hungarian forint was relatively uninteresting, the Czech crown has lost today three-quarters of a percent compared to Friday,” added Komercni Banka’s chief economist Jan Vejmelek, quoted by the Czech News Agency.

Hungarian tourism to be hit

In Hungary, which has also not confirmed any coronavirus cases yet, the Budapest Stock Exchange’s BUX index has dropped in the last few days, though it remains well above the values seen in mid-2019.

To try to contain a possible outbreak, Hungary’s government has called on citizens who have recently returned from northern Italy to stay at home for a period of two weeks as a precautionary measure, it was announced on February 27.

The head of the Prime Minister’s Office, Gergely Gulyas, said at a regular press briefing on February 27 that it looks unlikely that Hungary can avoid the epidemic as it has appeared in three neighbouring countries: Austria, Croatia and Romania.

Hungary’s tourism sector is expected to suffer a setback, not least because Budapest is one of the popular arrival points for Chinese tourists visiting Central Europe.

Hungarian low-fare carrier Wizz Air has announced that it is reducing the frequency of some of its flights, among them ones to destinations in Italy, because of a fall in demand from March 11 until April 2. Wizz Air says it has not suspended the flights and has not cancelled all of them; rather, it is operating them with reduced capacity.

The first coronavirus case in Romania was officially confirmed on February 26. The subject is a man from Gorj county, southern Romania, who came into contact with the Italian diagnosed with coronavirus who recently visited Romania. 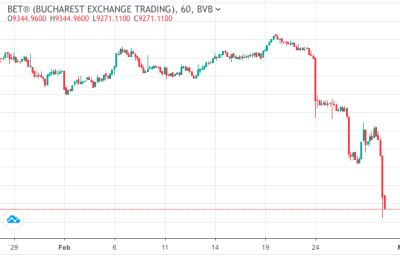 This came just a week after the BVB issued a statement saying it had so far been largely unscathed by the uncertainty in global markets. Indeed, the Romanian stock market rose slightly at the end of January as the BET index traded half a percentage point higher, after having repeatedly tested the 10,000-point mark, the highest level in the last 12 years, the BVB said in a statement on February 18.

However, Adrian Tanase, CEO of the BVB, commented at the time that it was hard to predict developments this year.

"We are living in an international context marked by volatility, which stems from investors' uncertainties about what positions they should take in the markets,” said Tanase on February 18.

“Beyond external influence, domestic factors could also trigger misalignments to the trend of international markets. It is difficult, at this moment, to imagine that we will have in 2020 a growth rate similar to that of 2019, namely 35% for BET or 47% if we take into account the dividends. Should disruptive factors not occur, nor should the Romanian economy slow down, the publicly traded Romanian companies have solid foundations to contribute to the overall growth of the market this year as well.”

The collapse of stock exchanges in the region comes amid a global sell-off, as the head of the World Health Organisation, Dr Tedros Ghebreyesus, warned the outbreak had reached a "decisive point" and had the potential to become a pandemic.

As of Friday morning, the London Stock Exchange’s blue chip FTSE 100 index is down 8.2%. Substantial falls were also reported in other major European indices, the Paris CAC 40 and Frankfurth’s DAX 30, as well as the Dow Jones.

Meanwhile, after an extremely strong January, Russia’s leading dollar-denominated Russia Trading System (RTS) crashed by 266 points from its peak in the third week of January and lost 60 points in just one day on February 27, while the ruble-denominated MOEX Russia Index likewise dropped like a stone, losing 311 points from its peak as investors sold off heavily.

Contributions from bne IntelliNews correspondents in Central and Southeast Europe