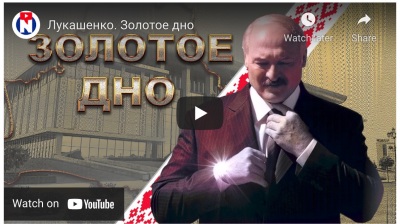 The 1.2-hour-long video “Lukashenko Gold Mine” is an investigation into Belarus' President Alexander Lukashenko luxury residencies and the way he has enriched his friends.
By bne IntelliNews March 10, 2021

The Nexta video documents the luxury residences and business connections of Belarusian President Alexander Lukashenko. The video is in Russian, but YouTube offers machine translated English subtitles in the video's setttings.

The 1.2-hour-long video “Lukashenko Gold Mine”, an investigation into Belarus President Alexander Lukashenko's hidden wealth, released by the Nexta telegram channel on March 8, has had 101,000 simultaneous views, a record for the channel.

In an echo of the “Putin’s Palace” investigation released by jailed Russian anti-corruption activist and opposition politician Alexei Navalny in January, the investigation exposes luxurious estates at the disposal of Lukashenko, his lavish lifestyle and how he has enriched businessmen in his circle.

“Nexta has just released massive video report about Lukashenko's riches. And the role of the corruption & oligarchs play in acquiring the riches. And how eg EU credit lines are used as profit centres. And more,” tweeted Ihar Filipau, a respected Belarus watcher.

Released during the March 8 international women’s day holiday, the video viewership instantly soared to record highs in the same way as Navalny’s Putin’s Palace garnered over 100mn views in less than week.

Only five hours after the release of “Lukashenko Gold Mine” the video already had 500,000 views, and by the time of writing on March 10 had garnered 2.7mn views.

The video was posted by Belarusian journalists based in Poland on the Nexta Telegram channel that has been the main source of information for protesters since the disputed August 9 presidential elections last year.

The journalists accuse Lukashenko of financing several luxury real estate items and expensive cars with public money, based on an anonymous source in the presidential administration.

Lukashenko has not commented on the video, but just last week indirectly rejected claims that he owns a secret luxury estate.

It is fairly common for well-established leaders in the former Soviet Union to build themselves luxury hideaways. Only last month an RFE/RL investigation said Uzbek state companies had built a secret luxury mountain resort for use by President Shavkat Mirziyoyev that cost tens of millions of dollars.

And famously ousted Ukrainian President Viktor Yanukovych built the sumptuous Mezhyhirya Residence for himself just outside Kyiv, which included a private zoo complete with ostriches.