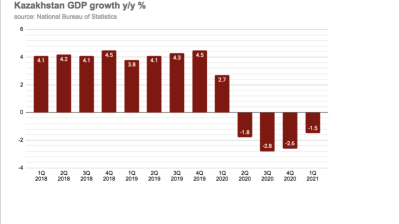 Kazakhstan's GDP contracted by 1.5% y/y in the first quarter, according to latest official figures provided by the national statistics office.

The figure is very slightly different from the preliminary results published earlier, which showed that GDP contracted by 1.6%. The first quarter’s GDP contraction was shallower than the 4.5% drop posted in January and the 2.9% decline seen in January-February. Kazakhstan’s GDP shrank by 2.6% y/y in 2020. The contraction was driven by a 5.6% y/y drop in the services sector, which was hit by lockdowns brought in to stem the spread of the coronavirus (COVID-19) imposed in March-May and July-August. The economy was also likely hit by global impacts of the pandemic, including falling demand for energy and reduced world oil prices.

The 1.5% contraction in the first quarter of 2021 shows signs of an expected economic recovery brought about by the easing of pandemic-related restrictions.

Sberbank CIB expected that “the low base from 2Q20 will significantly boost the economy in 2Q21”, but sees the effect gradually ebbing over the rest of the year. The analytical arm of the Russian bank projects GDP growth at 3% this year.

The World Bank’s Kazakhstan Economic Update published on January 29 anticipated that the Central Asian nation's economy will grow by 2.5% in 2021 and by 3.5% in 2022. In a later update in March, the World Bank said that it projected “3%-4%” growth. It also saw significant downside risks due to the uneven worldwide economic recovery and higher debt-related risks on global financial markets.

World Bank experts regard 2020 as the most challenging year experienced by the ex-Soviet state’s economy in two decades. 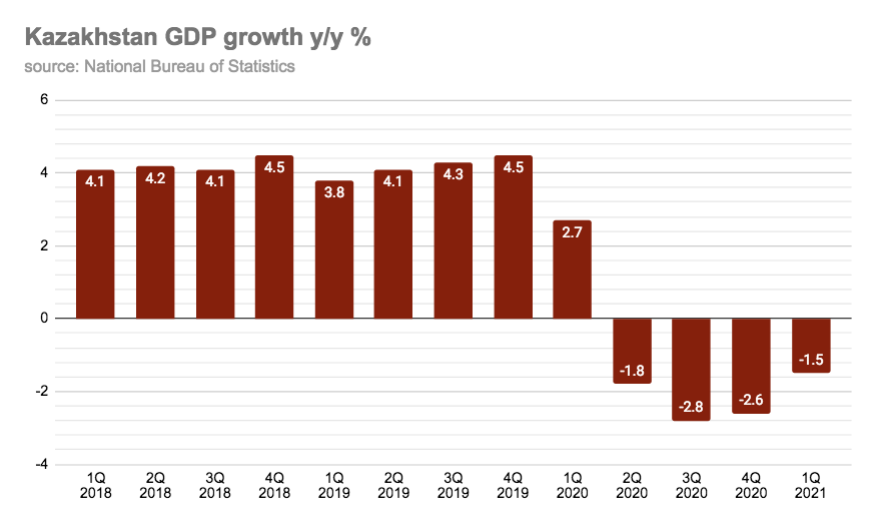