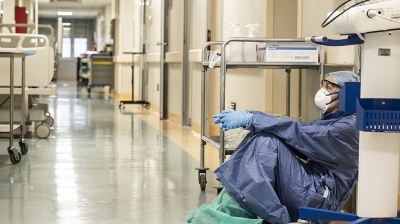 Exhaustion among medical workers battling the onslaught of the pandemic is now a major concern in Turkey and elsewhere.
By bne IntelIiNews October 26, 2020

Turkey is now on a trend in which it reports more than 2,000 coronavirus cases per day (the October 25 figure was 2,017 with 72 deaths), similar to the situation in late May. International news agencies continue to report these figures in the same fashion that they generally do for other countries, but the data are actually a nonsense because, as Turkey’s health minister Fahrettin Koca conceded at the end of September, they do not include asymptomatic cases. Given that asymptomatic carriers of the virus can still spread it, the data omission is something that the World Health Organisation (WHO) has said should be rectified.

“No one believes the figures”

On October 26, Turkish media outlet bianet ran a story headlined: “No one believes the official COVID-19 figures in Turkey.” The article included details of a press briefing at Istanbul Medical Chamber in which chamber representatives said that officials “can tell success stories all they want, we are dying”, a reference to how while the government insists it is doing well in battling the pandemic in the country, things are so bad that 120 healthcare workers, including 52 physicians, had died of the virus, according to information gathered by the Turkish Medical Association (TTB).

Istanbul Medical Chamber executive board member Osman Ozturk said that the coronavirus outbreak was still ongoing at full pace, Mezopotamya news agency reported. "Coronavirus has now turned into a mistreatment of healthcare workers in Turkey," he said, protesting that the "wrong policies and wrong practices" of the ruling Justice and Development Party (AKP) “government claims the lives of health workers."

"Our friends, our colleagues are dying," he added, saying: "On the other side, they are telling success stories, they are giving numbers every evening; however, no one believes the numbers they give. All these numbers are a big lie. We know the truth."

Concluding his remarks, Ozturk said: "In this process, we—as the TTB and Istanbul Medical Chamber—are struggling and will keep on struggling to protect our colleagues, health workers and the people."

In mid-October, President Recep Tayyip Erdogan urged Turkey’s parliament to legislate to curb the influence of medical associations and other institutions that have criticised his government’s response to the pandemic. In a speech to members of his AKP party, Erdogan said the TTB and other professional associations “are clearly acting in a way that is against the constitution” and the matter has “reached an unbearable level”.

Koca at the weekend sounded the alarm over rising coronavirus cases in the country, with Istanbul making up about 40% of the country’s total and Ankara around one fifth of that—but again he did not provide the data to allow a full assessment of the coronavirus outbreak in Turkey on an international comparison.

Almost all Turkey’s coronavirus restrictions were lifted in June, but the government has since enforced measures such as social distancing and wearing masks, and has imposed fines on those who break rules. Officials said last week Ankara was considering reimposing some restrictions to stem the resurgence of cases but would avoid throttling the economic recovery.

BEYOND THE BOSPORUS: A peek under the lid at Turkey’s obscured problem loan burden
Estonian animation studio Imepilt to hold IPO
Ukraine debt: muddling through for a bit longer but 2021 will be tough