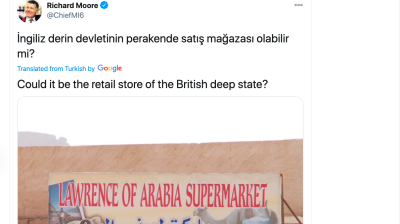 The double bluff of the treacherous Britons is all too familiar to the Turks.
By Akin Nazli November 14, 2020

I have sweaty palms as I type this but Richard Moore—the Chief of the UK’s Secret Intelligence Service (MI6), known as “C” to those who recognise the significance of the green ink—was on November 11 huddled (with appropriate Covid measures in place no doubt) with Turkish President Recep Tayyip Erdogan’s spokesman, Ibrahim Kalin, in the Bestepe Palace in Ankara. Don’t take it from me, take it from “sources speaking on condition of anonymity due to restrictions on speaking to the media” who informed Turkey’s government-run news service Anadolu Agency.

It seems that restrictions on speaking to the media were so strict that all of Turkey’s government-controlled foreign-language media outlets repeated the story, including TRT Portuguese and Hurriyet German.

But not a single word in the British press! Of course, the United Kingdom has a well-drilled media that strictly turns a blind eye to the close relationship between the House of Windsor and Erdogan dynasties.

As we sleuth for clues on what on earth made top British foreign intelligence spy Moore journey to Turkey while the coronavirus second wave rages like never before (just a thought, but I suppose with the endless delays in getting the new Bond movie on to the big screen he has plenty of time to spare) we can be thankful that the Erdogan regime likes advertising its close affiliation to the British establishment (a great-grandfather of Boris Johnson was a Turk so the deal is sealed).

Anadolu’s sources inform us that Kalin and ex-UK ambassador to Ankara Moore “addressed security and foreign policy issues, as well as possible cooperation to further develop relations between Turkey and the UK”. Now, you’re sitting up. What’s more they “discussed recent regional developments in Nagorno-Karabakh and Libya, while exchanging ideas on common security policies for stability in the Middle East and the Eastern Mediterranean”. Somebody pass the smelling salts.

And that’s it from Anadolu Agency. Thanks guys.

Impertinent of me, I agree, but one does get to wondering why Moore was not meeting with his counterpart rather than Erdogan’s spokesman. And what are they so very mutually involved with in Karabakh, Libya, the Middle East and the Eastern Mediterranean? Couldn’t they have handled things over Skype? What kind of a message are they sending to the millions of Turkish and British confined to indoors by Covid by going to such lengths to meet face to face? We all have projects you know.

At least Kalin should be immune from the plague right now, having on October 31 confirmed in a tweet that he had reached the final stage of coronavirus treatment before on November 5 letting the worlds of spokesmen and spooks—and anyone else with a passing interest—know that he was fully recovered.

Perhaps there is a newspaper in the UK which we could ask to check on the unflinching, intrepid Moore. Is he sticking by the quarantine rules having travelled back from a country no longer on London’s safe travel corridor list? Even Northern Cyprus and Russian officials have let it be known that they are fully aware how dodgy taking a trip to Turkey is right now. Wake up Fleet Street!

Moore’s visit, as it happened, came three days after the “family implosion” at the palace that saw finance minister Berat Albayrak—who’s married to Erdogan’s elder daughter—post an emotional, shock resignation on Instagram after papa president fired the central bank governor.

Did Moore really not at least bump into Erdogan in the corridors of the palace? He’s fortunate that a denial would be plausible. It’s a big place. The main building alone has more than 1,000 rooms.

Albayrak, we shall remember, was the leader of the Pelicans who, taking their instructions from Erdogan, set about dislodging prosecutors and judges aligned with fellow parallel organisation, the Gulenists, after the failed coup of July 2016. The Pelicans also direct the Erdogan media.

On a TV chat show in 2017, the Turkish-speaking Moore, who at that time was still the UK’s envoy to Ankara, said he did not want to “jump to conclusions” as to the involvement of the Gulenists in the attempt at toppling Erdogan & Co, adding: “But do I have any trouble in accepting the Gulenist movement played a part in this? No, I don’t frankly.”

Ever since, the Erdoganists have sold this short exchange as showing that Moore acknowledged the Gulenists’ role in the coup attempt.

Murat Yetkin, previously editor-in-chief of Hurriyet Daily News, on August 5 wrote a blog post sub-headed “A strange July 15 memory with Moore”. “Late on July 15, 2016,” he recalled, “a crowded reception was held at the British Consulate General in Istanbul and Moore had come from Ankara to join. There, I was asking him questions—some of them sharp—about Boris Johnson, who was appointed the new U.K. foreign minister at the time, and he wanted to change the subject. Suddenly, ‘Really, what are your soldiers doing?’ he asked… I responded to him asking if he had heard something, but he said something like, ‘No, just asking.’

“That chat did not go further. The reception ended, I went back home, but a little later I was back on the way to the newspaper due to the start of the coup attempt.”

Getting wind of the coup attempt in store was not a tall order. The Russians even warned Erdogan about what was afoot. They were then puzzled by the Turkish government’s inaction.

Far more difficult is working out what’s going on right now between Erdogan family members and how things could evolve (shall we assume that no-one will attempt a coup this time?). What might “C” have found out?