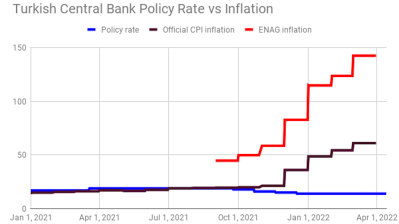 Turkey’s official consumer price index (CPI) inflation recorded 61% y/y in March following on from 54% y/y in February, the Turkish Statistical Institute (TUIK, or TurkStat) said on April 4. Not since March 2002, when the indicator was recorded at 65%, has the CPI reading been higher.

At 61%, Turkey comes in a squeak behind Suriname in the global inflation league. Suriname posted annual inflation of 61.5% as of January, ranking it sixth worldwide.

The hunger and poverty rampant across Turkey as per usual hardly got a mention as the media went to work with their dry coverage of this Losers' League of inflation, but, as is now traditional following the inflation data release, Istanbul's independent inflation research group ENAG was quick to pop up to advise the scribes that they were crunching the wrong figures. The unofficial inflation readout from ENAG showed inflation of 143% y/y in March versus 124% y/y in February.

Unbelievable? Believe it. But even those who stick with the official 61% y/y cannot escape the ugly reality that the inflation rate now sits at least 47pp above the central bank’s policy rate of 14%. The rate determined by ENAG is 129pp above the benchmark.

In February, Turkey's official producer price index (PPI) inflation entered three-digit territory for the first time since March 1995, when it was posted at 144% y/y.

Following the March release for official CPI inflation, there was a sense that the market has thrown in the towel when it comes to anticipating where Turkey’s inflation reading might peak. Previously, the market assessed that a figure in the 60%s in May might provide the summit. Currently, god only knows.

Brent oil and commodity prices, in general, are still on a wild path. So far, the price fluctuations have been ascribed to speculative trading on the financial markets.

Despite the fluctuations, average commodity prices have boomed. The FAO food price index was record-breaking in February at 141, up 24% y/y.

If the lira crashes again and commodity prices go totally off the rails, Turkey will sail through four-digit inflation.

On April 14, the MPC is scheduled to hold its next rates meeting. Currently, the market expectation is that it will again hold the benchmark.

On May 5, TUIK and ENAG will release their inflation figures for April.

Net lira creation via loans has gone beyond the pale again. As of March 29, lira loans grew by TRY 179bn ($12bn) compared to end-February, setting a new all-time high, leaving the TRY141bn seen in April 2020 behind.

Despite the eased monetary conditions, economic activity has not responded positively. And Turkey's big export market Europe has also endured a slowdown since the beginning of 2022.

Ukraine was still resisting Russia's invasion as of April 4, while the Russians had retreatred from around Kyiv. See the live map here.

The media's attention span for the war is contracting, just as the slaughter is intensifying. The Russians have surrounded cities and are laying them to waste. The mood is that everyone wants to end this unnecessary massacre, but there is no deal emerging on the horizon as yet.

Chemical weapons or not, risks and provocateurs will abound until the violence ends.

Whatever the result of the war, Vladimir Vladimirovich Putin, has already proven himself a loser. Prior to February 24, he was among the biggest energy speculators in the world with more than $600bn of cash and cash-equivalent in his pocket.

His hobbies included confounding despised representatives of so-called democracies, intervening in US elections and supporting the extreme-right in Europe. He's now a stony-broke loser struggling to think of a single reason why the Russian oligarchy should not get rid of him.

Back to the lira. The Erdogan regime has been aiming to keep the USD/TRY pair below the 15-level since March 4. It is unknown how much is flowing into the central bank’s account from the lira deposit protection scheme and exporters, while the reserves are still in decline.

In April, a limited recovery will be observed as gas bills will decline and the tourism season will begin.

Turkey’s 5-year credit default swaps (CDS) are hovering in the 500s while the yield on the Turkish government’s 10-year eurobonds is in the 8%s.

On the global markets, the USD index (DXY) magically remains below the 100-level, while the yield on 10-year US Treasury papers has surpassed the 2.50-level.

At the end of the day, ECB governor Christine Lagarde has not given a clear signal for a rate hike.

Fed governor Jerome Powell said in his press conference that balance sheet reduction may begin from the next meeting to be held on May 3-4.

The Fed governors have anticipated the delivery of six more rate hikes in the remainder of 2022 to bring the policy rate to 1.75-2.00%.

There are six more rate-setting meetings left in the year. The governors thus expect to deliver rate hikes at every meeting.

May, August and November this year could bring blood red markets due to the Fed tightening.

On May 4, the Fed’s open market committee will announce the results of its next meeting. After that meeting comes the June 14-15 meeting. Updated projections from the governors will be released.

Tightening is inevitable now. The market does not like it. The US yield curve has flattened.

Under normal conditions, if the curve becomes inverted (particularly when the 2-year yield is higher than the 10-year yield), it is a signal that the market expects a recession in the next year.

However, the Fed has been the dominant player in the US bond market since 2020. So, whether the market is functioning normally at the moment is discussed.

The Ukraine war is unmistakably in the policy texts of both the Fed and the ECB.

Recently, Joe Biden said that Putin was increasing fuel prices in the US.

In the old days, these businesses used to be conducted more implicitly. The masses were told about patriotism, the flag, the nation, democracy and so on.

Right now, the policymakers simply do not state that “this war has come as a godsend to blame for all our problems”.

Biden can try to cut down on the amount of dollars in circulation and he can check again whether Putin can once more increase fuel prices.

Inflation in the Euro Area extended its record to 7.5% y/y in March after breaking out to 5.1% in January and 5.8% in February. Producer price inflation reached 31% in January.

How inflation trends can be reversed without a recession in the real economy and a collapse in the financial markets is unknown.

In Turkey, President Recep Tayyip Erdogan confirmed he is staring defeat in the face at the next polls by messing with the election law. It is a tradition in Turkey that the governing party has a go at re-engineering the the election law when it is convinced that it has lost in the next polls.

Under normal conditions, amendments to the election law come into effect at the end of the first year following parliament's approval. However, the electoral board change will come into effect after three months. So, Erdogan keeps the option of a snap poll in his hand.

Other changes voted through do not make much sense. For instance, the ruling coalition has attempted election engineering based on the results of previous elections. There is a method for allocating seats in parliament known as the D'Hondt method, which punishes smaller parties in favour of bigger parties.

Now the D’Hondt method will not be applied to the party blocs but directly to the parties. The regime hopes to benefit from it (it seems it has no hope of winning the presidential election but is trying to hold the line in parliament). However, the results will change at the next polls and the amendments will work in favour of the opposition. This always happens in Turkey. When a governing party changes the election law, the amendments end up working against it.

At the end of the day, Erdogan has three options. He can delay the elections (a war, perhaps even the ongoing conflict in Ukraine, is the legal option for a delay). He can go for a harder dictatorship, just as his bestie Alexander Lukashenko did in Belarus. Or, he can hand over the presidency (though losing its protection would spell big trouble for both him and his family across the globe).

Erdogan will try any chance he gets. The risk of blood on the streets remains significant.