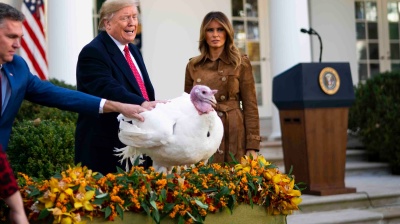 NO bird should have to tolerate this.
By Akin Nazli in Belgrade November 30, 2019

Donald Trump? Funny my arse. But the guy’s doing his best goddammit and Turkey got a look-in this week gone by when world chief honcho connected the barbs he gets over his big pal let-offs for Turkish prezza Erdogan with his Thanksgiving photocall at the White House. “It seems the Democrats are accusing me of being too soft on Turkey,” said Uncle Donald seeking the usual clutch of laugh lines while encountering North Carolina birds Bread and Butter during the traditional presidential pardoning of a Thanksgiving turkey in the White House Rose Garden.

“Ah jeez, he just had to go for the corny pun, sorry America, I couldn’t save you there…” thought the author of “A Warning” by “Anonymous”, who no doubt was little more than a few yards away from the podium, but the real trouble with this latest humour fail was that the best joke unleashed on a US audience this week came from Nato's very own proper despot Recep Tayyip Erdogan—with props provided by Vladimir Putin—who embarrassed the Pentagon’s top brass by reportedly flying American-designed F-16 warplanes over Ankara to test the radars on the S-400 missile defences he’s acquired from the Kremlin.

So while Trump’s still got to bother with some tedious constitutional due process as the Democrats wage their attritional ‘Ukraine’ impeachment war on his stink of an administration (of course Donald F*ck’s best tactic here is to represent it all as one big yawn, with many Americans still asking themselves What is Ukraine?), Erdog’s only gone and ring-fenced his presidential complex with some tasty multi-billion dollar military merchandise to deter anyone thinking of going one better than the July 2016 ‘palace coup’.

“Thankfully, Bread and Butter have been specially raised by the Jacksons [at their farm in ‘Tar Heel’ state North Carolina] to remain calm under any condition, which will be very important because they’ve already received subpoenas to appear in Adam Schiff’s basement on Thursday,” the US President Donald Trump went on during his turkey pardoning speech, referring to the closed-door depositions in a Congress ‘basement’ Democrat bigwig Schiff has angered Republicans with. “It’s true. Hundreds of people have,” Trump added.

The Commander-in-Chief, famed for doing his homework, was no doubt fully appraised of the fact that the turkey is a bird that looks wild and might appear to glower at humans, but it’s actually a tamed animal and can remain calm under almost any conditions when it’s been raised properly at some US farms.

When it comes to the top Turkey guy Erdogan, however, any attempt by his would-be Western masters to raise him properly went right out the window years ago. On almost any day of the week, he’s yelling angry rhetoric at Europe, Israel, the Kurds, those in his own party getting cold feet, Western energy companies daring to drill near Cyprus, or even at Trump (though Trump’s got no quibbles with Erdogan’s angry ass style, that’s just how he likes it). Not that the devious Sultan hasn’t got it in him to adopt an extremely calm real statesman’s act when it’s required, as long as the cameras aren't rolling.

The case of American Evangelical Presbyterian Pastor Andrew Brunson, essentially kidnapped by the authorities in Turkey after the botched coup when state tough nuts went around throwing spurious claims of terrorist associations willy nilly, was a great one for the endless Erdogan outbursts it laid on.

“As long as this fakir [Erdogan] remains in this post, you [the US] won’t get that terrorist [Brunson] returned,” declared Erdogan in January 2018 while addressing mukhtars (village heads) at his Ankara complex.

“[The US] is threatening [to set a certain deadline for the release of Brunson]… You will see how things are at 18:00 tomorrow. Is this country a [banana] republic? This is Turkey. What’re you doing!?” Erdogan shouted at the media on August 11, 2018, a Saturday.

On August 13, a Monday, when the markets opened, the Turkish lira hit a historical high of 7.24 to the dollar.

It was an adrenalin rush Trump has not forgotten. Sure he’s his strongman pal, but, perhaps when he’s gagging for a power fix, our man with the FishMac behind the Resolute desk in the Oval Office sometimes threatens Erdogan, on Twitter or during a press briefing, with laying waste to the Turkish economy if Erdogan does not follow his orders.

Not to forget Trump’s ‘insane’ “Don’t be a tough guy” letter to Erdogan on the eve of the latter’s Syria invasion (memorably trolled by Hillary Clinton, not that we’re forgiving her and her useless-as-a-bent-nail presidential campaign for getting us into this horror show in the first place).

On November 13, at an Erdogan and Trump joint press briefing at the White House, an American journalist asked Turkey’s finest: “And President Erdogan: President Trump sent you a letter on October the 9th, urging you not to launch a military action into northern Syria.  He said, quote, “Don’t be a tough guy.  Don’t be a fool.”  You ignored that letter, and you went ahead, and you launched a military action into northern Syria. Can you explain why you ignored the President’s warning?”

Erdogan replied: “Well, this letter was represented to Mr. President this afternoon. And I’ve also underlined the fact that a terrorist, such as Ferhat Abdi Sahin, should not be considered as an interlocutor by a country such as the United States… And, as I’ve said before, I have shared them with His Excellency, Mr. President. And we gave back the letter that we have received.”

Odd that, as the BBC previously reported that he chucked it in the bin. But hey! This is post-truth history, why get hung up on the pesky details!? Watergate sucks! Damn you Bernstein! Damn you Woodward! Screw you Ben Bradlee!

A final pointer. If you’re still wondering why Trump loves Erdogan this much, even though Erdogan sometimes loses his cool, you can dispense with those boring impeachment tragedies in the House. Tim Miller has compiled all aspects of this “tough love” for The Bulwark.